Trucking has arrived in – or at least returned to – the mainstream of pop culture with the publication last month of a graphic novel (a.k.a. comic book) called The Ghost Fleet.

Written by Donny Cates and illustrated by Daniel Warren Johnson, The Ghost Fleet was inspired by what its author calls an “urban legend sort of thing” in the trucking community. The comic, published by Dark Horse Comics, revolves around a clandestine trucking operation that hauls sensitive or dangerous cargo so secretive that even those carrying and protecting it don’t know what’s onboard.

A scene from The Ghost Fleet

Think of it as episodes of the ‘90s TV show The X-Files on 18 wheels and with a lot more gunplay, a combination that appears to be a hit with the comic book reading public.

“I’ve always been into trucker culture,” says Cates, a 30-year-old former comic book store owner living in Austin, Tex. “All the movies with (Sylvester) Stallone and Kurt (Russell); those badass truckers. But, the story came from, of all places, the History Channel (television) show Modern Marvels.

“This particular episode was called something like Dangerous Cargo, and it was all about these big rigs that haul these really huge things like space shuttles. At the very end of the episode, they bring up the Ghost Fleet.”

Cates says that when they asked the truckers they were interviewing about the Ghost Fleet, “… one by one they refused to talk about it. And, I was like, ‘Man, what is that? That is sexy!’ I thought what, are there like black ops truckers out there?

“The more I got into it and started researching it, it’s not that cool. It’s NASA parts or military hardware, stuff like that. But, I had already gotten it in my head that these were the guys who picked up the alien from the crash site in Roswell.”

The more truckers he talked to while researching the comic, the more he heard something like, “I knew a dude who knew a dude whose uncle drove one of those. I got the impression that in the trucker community, the Ghost Fleet is this kind of urban legend sort of thing and that’s just so cool to me.”

And, thus a comic book hit was born.

Reviewer Zac Thompson at Bloody-Disgusting.com wrote: “After having just finished Ghost Fleet #1 I can assure you this is a comic you don’t want to miss. It’s so much more than a long haul trucker action comic, although it has plenty of that … It’s less Maximum Overdrive and more Indiana Jones, but with it’s own spin. The world is huge and the first issue is pulse pounding and mysterious in all the right ways. Plus writer, Donny Cates is a standup dude. He was more than energetic this past week at NYCC (New York Comic Convention), and was just excited to share his story with others. So be sure to pick this bad boy up in the first week of November from Dark Horse Comics.”

The Ghost Fleet is available in comic book stores or you can purchase it or read a digital version online at Dark Horse.

While not a driver himself, trucking runs in Cates’ family.  He says his grandfather  — W.C. — was, “one hell of a trucker. A straight down the line stereotype outlaw trucker from the ‘60s.” While Cates never knew the man, he heard plenty of stories from his father, who spent some time driving for an airfreight company.

A scene from The Ghost Fleet

Cates says his dad also taught him while growing up, that when you are on the highway to always be aware of the big rigs and let them have their room. He was also taught to respect what truckers do.

“It sounds corny, but I was raised in a household where we were taught to respect the truckers,” says Cates. “They were the kings of the road, and I still do that. If you stay with truckers (while driving) then you’ll always be safe.

“This was something I always admired; the trucking community’s values. It’s good old American hard work. It’s something I feel these days isn’t seen as that cool anymore. I worry that today they (truckers) are seen in sort of a pejorative light, which is beyond me.”

Before writing comic books, Cates sold them. He thought that was what he would do the rest of his life, and says he was really happy doing it.

“I ran a bunch of comic books stores here in Austin,” he says. “I ran four stores and then I ran them right into the ground.”

But, after those closed down, he jokes, “I found myself without what you would call any useable skills.”

The scene that inspired a tattoo.

So, Cates decided to try his hand at drawing comic books. He enrolled at the Savannah College of Art & Design (SCAD) in Georgia. After about two years, Cates says he decided he wasn’t very good at drawing so switched to writing.

After a summer internship at Marvel Comics and working there for a while, Cates says he started putting together his own comics.

His first title was Hunter Quaid, which Cates described as a “goofy, Saturday morning cartoon-like, time-traveling detective from the ‘40s” story he wrote with his friend Eliot Rahal. Hunter Quaid, which was illustrated by a classmate from SCAD, wound up in an award-winning anthology published by Dark Horse in 2009.

But, his big break came with the creation of possibly one of the most unusual super heroes ever to grace the pages of any comic book: Buzzkill, whose super powers were derived from drinking massive amounts of alcohol. This comic was a collaboration with Mark Reznicek, the drummer – and huge comic book fan – of a well-known Austin rock band, The Toadies.

The two produced a five-issue mini-series of Buzzkill, which also served as Cates’ further entry into Black Horse.  Cates calls that his “big break.”

With a foot solidly in the door of the Milwaukie, Ore. publisher, Cates pitched his idea for The Ghost Fleet and for another proposed comic, expecting to get approval for maybe six issues of one or the other. Instead, the company said yes to both, and Cates set to writing two “ongoings,” which is comic book speak for titles that have no end in sight, a good thing for creators like Cates.

And, just how psyched is Cates about the current arc of his career and the reception of The Ghost Fleet?

There is a scene in the comic where a truck and trailer topples off a bridge. A solitary figure is on the ground below it, directly  in its path. Cates had that scene tattooed on this arm to remind him of the deadlines that hang over his head now that he is a successful comic book author. 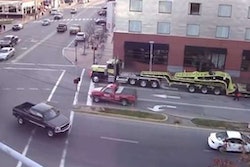 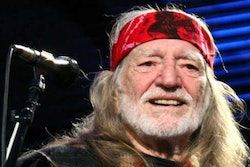 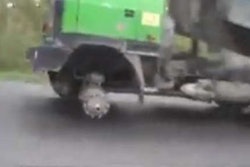 proof you don’t really need all those tires 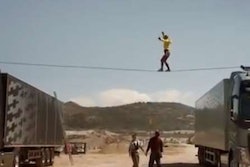 Volvo finds a new way to show off its trucks