Pickup loses control on I-75, slams into truck

A trucker’s dashcam captured what turned out to be a three-vehicle collision on Interstate 75 in Ohio last November. The Ohio Highway Patrol gave this description: “A 2006 Dodge pickup, driven by Albert Morales, 43, of Columbus Grove, (Ohio) was northbound on Interstate 75 when he lost control, struck a guardrail, and ricocheted back into traffic where he struck a 2017 Freightliner semi, driven by Russell Hardesty, 75, of Wapakoneta (Ohio). The Freightliner jackknifed and pushed the Dodge pickup into a 2007 Ford Crown Victoria, owned by John Chapman, of Hamilton, Ohio.” Police said Morales was taken to the hospital while Chapman and Hardesty were treated on scene for minor injuries. 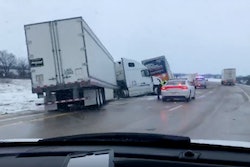 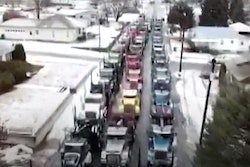 Respected Idaho logger gets fitting tribute when he dies 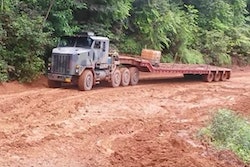 It takes a big truck to beat a big muddy hill 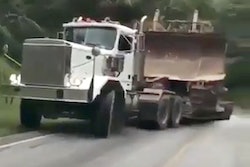 Trucker vs. Hill. And the winner is …