Unusually mild weather made travel not just difficult but downright treacherous over the not fully frozen muskeg. And, the El Nino parked in the Pacific Ocean meant one driver made a 10-mile lake crossing on ice a full foot thinner than usual.

Polar Enterprises owner Mark Kohaykewych set the stage for the episode and possibly the entire season when he complained, “It’s like spring out here.” Loads were stacking up in Polar’s yard because the ice roads were not even open yet; they simply weren’t solid enough to drive across. “We might not get all the loads into the communities.”

Fortunately, a cold front moved in and the road from Winnipeg, Alberta to Pikangikum, Ontario was firm enough to open. So, in the words of narrator Thom Beers, Polar “unleashed its top dog,” Todd Dewey.

Pulling a flatbed loaded with 25 tons of construction supplies, Dewey headed out with his trademark gusto, but downshifted to overt caution with no small amount of abject dread when he arrived at his lake crossing. Rough roads are one thing. A not fully frozen 200-foot-deep lake is another.

Driving with the door open and listening to the ice pop and crack under his truck, Dewey sweated out every inch of the crossing. By this time of year, the lake would normally be covered with at least 3 feet of ice. Instead, it was less than 2 feet thick, making Dewey’s comment that there’s already “a lot of stress this season” an understatement and a nifty bit of foreshadowing.

In the end, Dewey was able to claim he “conquered a badass ice crossing” and the First Nation village of Pikangikum had its building supplies.

Elsewhere, the new company formed in Season 9 by Darrell Ward and Lisa Kelly was already facing trouble. Both fretted on camera that the mild winter could mean fewer loads, which would mean less money, which would mean the year-old company was in jeopardy of not remaining solvent.

Still, Ward did not lack for bravado when it came to challenging Polar and Kohaykewych: “Last year we took a bit out of the apple. This year we’re gonna devastate the apple.”

Ward had the first load for Team Lisa and Darrell: a dry van filled with food and medicine headed 400 miles north to Garden Hill, Manitoba. He bounced over the nominally-frozen and totally rutted ice road and observed somewhat enigmatically at one point, “You could end up over into the rhubarb if you’re not careful.”

Ward almost got more than rhubarb when his focus seemed to stray and narrowly avoided a collision on a curve with another truck. Shaken, Ward pulled over to recompose himself, but headed on and made the delivery.

About 100 miles behind, Kelly likewise bounded over the unstable road. While the weather was unusually mild, there was still enough winter to give her trouble climbing a long, 15 percent grade with a 20-ton front-loader on her flatbed.

Finally, she had to “back all the way to Kansas” down the slope, chain up and make another run. “Grabbing gears as fast as I can grab them,” Kelly made it up the hill and eventually got the second half of the Lisa/Darrell first load of the season to Garden Hill.

Back in Winnipeg, Kohaykewych got the news another winter road has just opened so tapped “Polar’s Wild Card” Art Burke for the 400-mile trip to Wasagamack, Manitoba.

With 25 tons of lumber on his flatbed, Burke showed how he puts the “wild” in “Wild Card.” He pounded over the rutted road, bouncing in his cab and pounding his head on its roof; swearing all the way.

As he did, the lumber on his flatbed moved about almost as much as the driver.

Burke finally caught a glimpse of the trouble behind him, stopped and added another strap — one that was almost too short for the job — and pressed on.

Series mainstay Alex Debogorski was not featured in the opening episode, but a preview of Episode 2 included him. 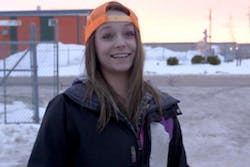 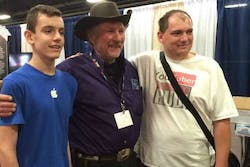 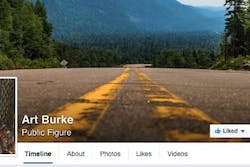 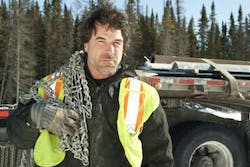