A North Carolina trucker is being recognized for his efforts to aid a fellow driver who had an accident on Interstate 26 in South Carolina.

The Truckload Carriers Association has named Stan Clayton, from Cherryville, North Carolina, a Highway Angel for stopping to help a truck driver after his truck rolled over on a highway exit ramp.

It was the evening of June 26 and Clayton was traveling on Interstate 26 near Spartanburg, South Carolina. As he approached the exit ramp for I-85, he witnessed another truck, with a 53-foot trailer and a sleeper cab, lose control on the ramp and topple over on its side. “It was a dogleg hook and it looked like he was going too fast for it,” recalled Clayton. “He laid it right over on its side.”

Clayton and a car in front of him, safely moved to the shoulder and rushed over to the overturned truck. “I looked through the front windshield and he was lying on the driver’s side door,” Clayton shared with TCA. The truck’s engine was still in drive and the tires were spinning. The driver seemed to be disoriented. The windshield was already bowed so Clayton popped it out carefully. Clayton then crawled inside the cab. “The driver was just looking around,” he said. “He said the seatbelt was hurting him. The steering wheel was pushing into him, too. He didn’t know what happened and didn’t believe me when I told him he had a wreck.” Clayton turned the engine off and then worked to release the driver’s seatbelt. As he tried to free the driver it scared him and he pushed Clayton back, causing him to fall out of the broken windshield. He sustained a serious slash to his leg that began bleeding quite heavily.

When the paramedics arrived they were very concerned about Clayton’s injury. However, he refused an ambulance ride to the hospital. He wanted to get his truck safely secured first. According to his manager, Clayton got back in his ABF tractor and returned to the service center, clocked out, and then proceeded to the ER to get medical attention. The slash to his leg cut an artery and required 22 stitches.

Clayton later learned the driver had been running empty with about 44,000 pounds of steel racks in the back. He figures they must have shifted when the driver took the curve on the exit ramp. Clayton’s injured leg has healed well and he’s back at work.

TCA has presented Clayton with a certificate, patch, lapel pin, and truck decals. ABF Freight System, Inc. has also received a certificate acknowledging their driver as a Highway Angel. 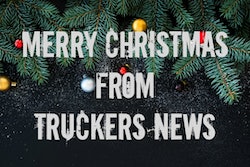 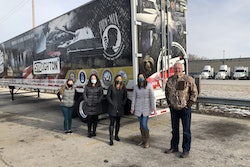 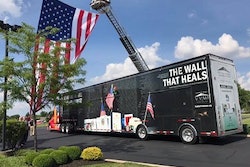