Cathy Dufrene: ‘She is my strength and my inspiration’

I love my trucker because she’s my mama. I can recall my seventh grade year in middle school — you know, when you are really nervous about what other people think of you and you think your social life is your entire life — yup, I was just entering that phase. She had been driving for about three years at that time for Arrow Trucking out of Tulsa, Oklahoma. She was assigned a run she had to go on right after she picked me up from middle school dance team practice. I remember being so embarrassed and outraged because she picked me up from practice in her big truck (and dropped me off at school in the mornings a few times as well). While other moms were teachers, bank tellers, or secretaries — anything but truck drivers — my mama was a big truck driver and I thought she was absolutely nuts! I struggled throughout my middle school and high school years because I never understood why she would want to get into a profession that required her to be away from home so much. I was angry and hurt, and often resented her for not being around to attend my recitals and football game halftime shows … but I was so naïve that I never connected the dots to realize that her driving trucks was the only way she could afford to pay for me to participate in the extracurricular activities I was involved in. That was a little over 20 years ago, and now that I have a husband and two sons of my own I definitely see things differently. She was so lucky to have found a job that she loves, that would allow her to provide for family. Some people pound through their days absolutely miserable with their jobs, but she really loves her job. She even went and worked on a driving contract hauling jet fuel in Iraq and Afghanistan in the early 2000’s. Since then she’s worked with Con-Way Truckload (until they became XPO) and CRST. She is my strength and my inspiration, and I pray that I can be half the woman she is. 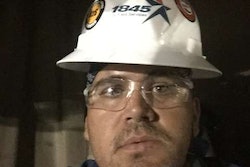 Anthony Foster: ‘ I love his ability to make me laugh’ 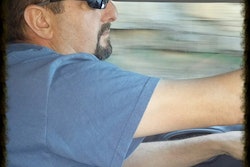 Rudy Falcone: ‘He is a great provider and spouse’ 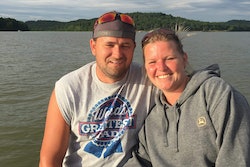