A trucker from Oklahoma has been recognized for helping out at the scene of a recent truck fire.

The Truckload Carriers Association recently named Angela Crager, from Oklahoma City, Oklahoma, a Highway Angel for helping to extinguish hay bales that were on fire on another vehicle. Crager drives for Decker Truck Lines in Fort Dodge, Iowa.

On Oct. 28, around 6:30 p.m., Crager was driving southbound on Interstate 35 in Guthrie, Oklahoma. She was headed home for the day when she approached a truck full of hay bales that caught on fire.

“Nobody was stopping to help them,” she said, “I thought, trucks have fire extinguishers for a reason.”

Crager pulled over, called 911, and proceeded to help extinguish the fire.

“I kinda took over the situation,” she said. “I was like, you’re gonna want to disconnect your truck from your trailer so if it really ignites you can save your truck and fuel source.”

Crager, who has been driving a truck for six years, stayed on the scene until police and firefighters arrived. At that point, the hay was still on fire. She said people like herself, from Oklahoma, look for ways to help others.

“It’s bred into us or something, to help out,” she said.

Since the program’s inception in August 1997, nearly 1,300 professional truck drivers have been recognized as Highway Angels for exemplary kindness, courtesy, and courage displayed while on the job. Thanks to the program’s presenting sponsor, EpicVue, and supporting sponsor, DriverFacts, TCA is able to showcase outstanding drivers like Crager. 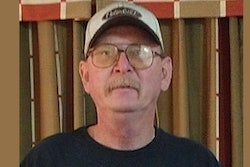 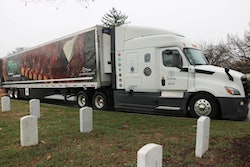 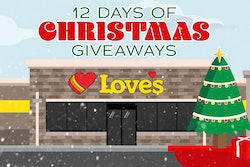 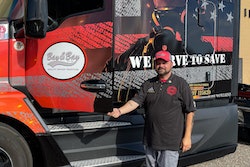