The Truckers Against Trafficking (TAT) Freedom Drivers Project rolled into Birmingham, Alabama Wednesday (May 4) at Boyd Bros. Transportation to educate employees on the realities of human trafficking.

The company hosted the trailer to further educate its employees on the role the trucking industry plays in combating human trafficking. Boyd Bros. has all of its employees go through TAT training and has TAT decals on all its trucks.

“There are over three million drivers on the road today, and so we want to train them to be the eyes and ears for law enforcement to help recognize and report cases of trafficking to law enforcement,” said Helen Van Dam, director of the Freedom Drivers Project.

Company driver Mike Usery has been with Boyd Bros. for 26 years and has driven over three million safe miles. He picked up the FDP trailer in Gulf Port, Mississippi in his company truck and hauled it to Boyd Bros.’ Clayton, Alabama location before bringing it to the headquarters in Birmingham. He’ll carry it on to the trailer’s next stop at the Georgia Truck Driving Championship.

The project’s message hit home for new company driver Connor Brooks. At his previous driving job, Brooks was stopped at a truck stop when he noticed a young boy, who looked to be about 12 or 13 years old, going from truck to truck.

He called the TAT hotline and reported the behavior, and when the authorities came out they discovered the boy had been previously abducted and was a reported missing persons. He’d been missing for about two years.

“He was one of the kids that they’d been looking for, and they took him off. He acted like he didn’t want to leave,” Brooks said. “They had him so messed up, that little guy, he didn’t want to leave those people. The people (traffickers) were sitting there promising him this and promising him that, and they were using him up like he was just baggage.”

TAT encourages drivers to call the National Human Trafficking Resource Center Hotline to report tips on potential human trafficking. Since the start of the hotline in 2007, they’ve had over 1,300 truckers call the hotline. That number doesn’t include drivers who directly called 9-1-1. Those over 1,300 calls have led to over 400 cases being investigated, involving over 700 potential victims with over 240 of those beings minors, Van Dam said. The National Hotline’s number is 1-888-3737-88 (US)/ 1-800-222-TIPS (Canada).

Dwight Bassett, chief executive officer for Boyd Brothers, and his wife offer their own personal incentive to employees: If an employee makes a call that leads to the rescue of a victim, they’ll give them $1,000 out of their own pockets. While that hasn’t happened yet, Bassett said he is looking forward to the day it does.

“If we can just help get a kid back to their family or get to the right support group that they need to be successful, that’s really what’s important to me,” Bassett said. “To give a young person a chance, get them out of that environment and give them a chance to be successful.”

Visit the Freedom Drivers Project homepage here to see a schedule of its upcoming tour stops. 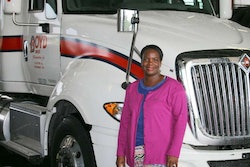