Choking driver crashes on I-65 in Indiana

A truck driver who was choking on a piece of candy Wednesday lost consciousness and crashed on I-65 northbound in Indiana.  The incident occurred at about 10:30 a.m. near mile marker 174 not far from the SR25/175 exit. 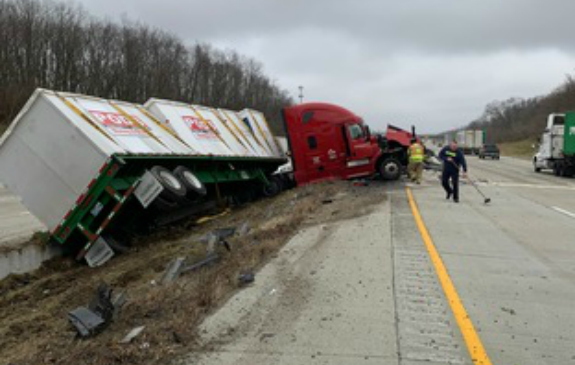 A truck driver chocking on a piece of candy was involved in this I-65 crash. (Indiana State Police photo)

A statement from the Indiana State Police said a red 2018 Freightliner driven by Robert E. Tate, 50 of Fayetteville, North Carolina was pulling a 2019 Fontaine flatbed trailer northbound on I-65. Tate started to choke on the piece of chocolate he was eating and lost consciousness, according to police.

Tate’s truck swerved off the left side of the roadway striking the metal median barrier. It continued through the barrier and came to rest on the concrete interior wall of the Southbound lanes, according to police.  Debris from the crash struck and damaged a 2016 Jeep traveling in the southbound lanes.  The driver was not injured.

Tate was transported to the University of Indiana Arnett Hospital in Lafayette with breathing problems.