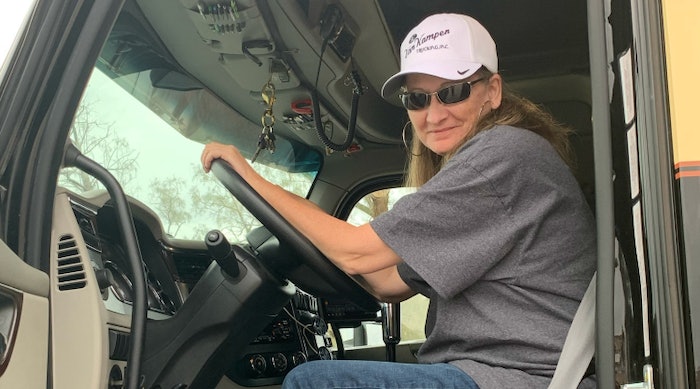 When Suzie Helgerson, 54, drives down the highway in her big rig, she sees emergency vehicles before most hearing people hear the sirens. Helgerson has been deaf since she became sick with German measles at the age of 6. She wears a hearing aid and communicates through American Sign Language and speaks using an interpreter. She can read lips when a person is directly facing her and can speak in response, but when someone doesn’t understand what she’s saying, she writes on a notepad, types on her phone, or uses sign language if the person knows it.

Helgerson, based in Waupaca, Wisconsin, has always loved to travel and spent as much time as she could riding with her husband, Duke, also a Deaf trucker. As her children got older, she started going on the road with him more often, always wishing that one day she could be behind the wheel instead of in the passenger seat. 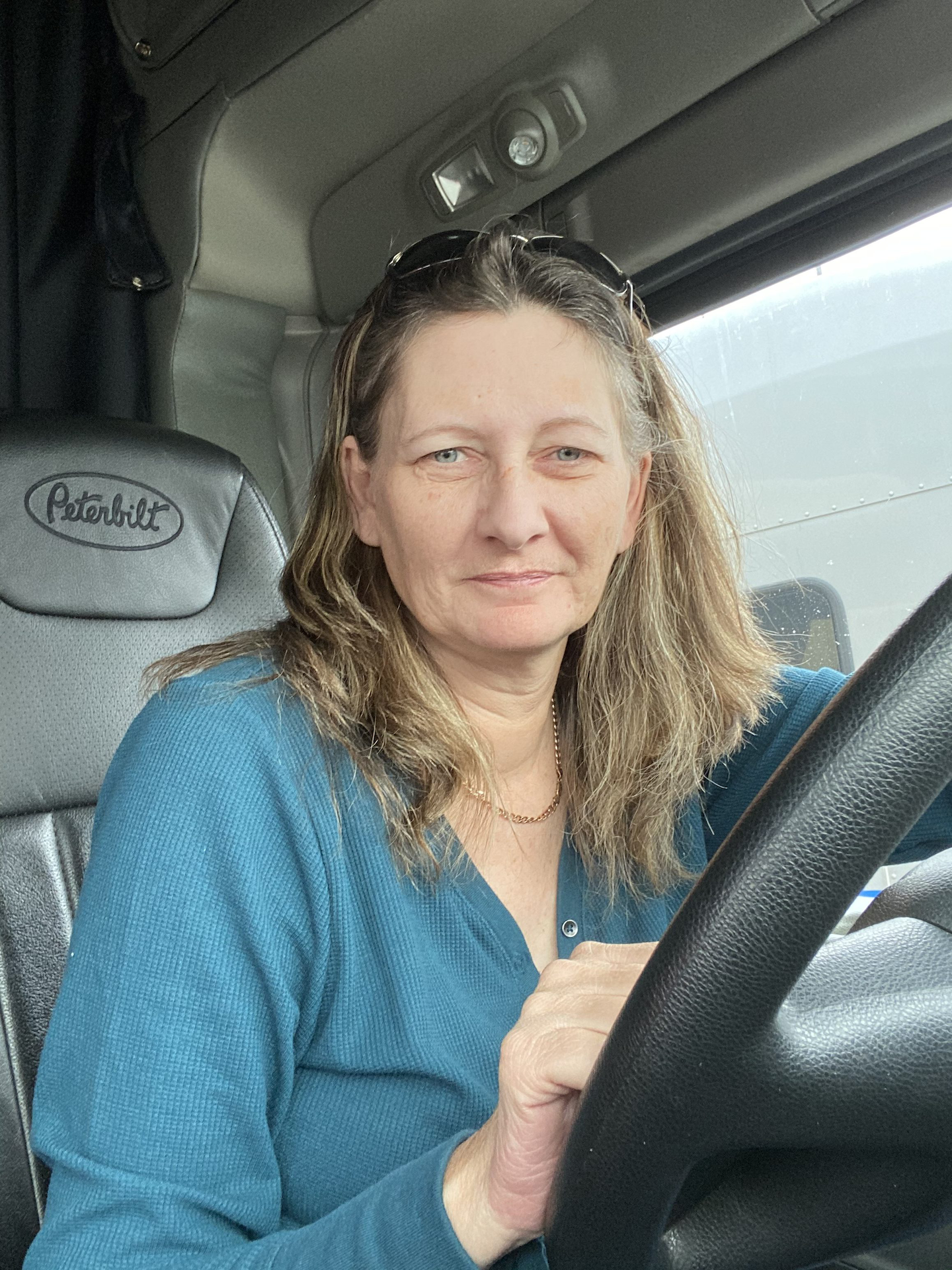 Her dream of becoming a trucker and being able to team drive with Duke seemed out of reach. At the time, to earn a CDL the DOT required passing a “whisper test,” — see “Meeting the standards” below — which excluded most Deaf people from trucking careers.

That has since changed: In 2013, after advocacy from Deaf Truckers United and the National Association for the Deaf, the Federal Motor Carrier Safety Administration granted its first set of exemptions from the hearing portion of the physical, giving Helgerson and other deaf and hard-of-hearing individuals the ability to obtain Class A CDLs.

The thinking behind the change is that trucks today are equipped with technology that levels the playing field for Deaf truckers.

Once the exemptions were in place, Helgerson began the journey to become a Deaf trucker. She says she relied on DTU for support while navigating the process. She submitted the paperwork and application for the required hearing waiver, completed 10 weeks of training with Fox Valley Technical College (where she used an interpreter), passed her CDL exam and got her official waiver to operate a CMV in 2016.

While the hoops she had to jump through were considerable, she’s thrilled to have achieved her dream. In fact, as Wisconsin’s first female Deaf trucker, she continues to be a trailblazer in her industry. The Helgersons drive for M.C. VanKampen Trucking, based in Wyoming, Michigan.

Helgerson takes most of the challenges in stride and continues to support Deaf drivers through her work with DTU, helping them navigate the maze of paperwork, including the burdensome, two-year renewal process.

A common concern from hearing truckers is understanding how Deaf truckers manage sirens, air leaks, tire blow outs and engine problems. And how do they communicate with shippers, receivers and dispatchers? Helgerson says that with today’s technology, Deaf truckers can operate safely. “Sirens can easily be detected from the mirrors and we use our eyes, especially peripheral vision, more than hearing truckers do. Our eyes are our ears,” she says. Even things like air leaks have warning lights. If detected, she uses soapy water spray to find the leak or she’ll ask a mechanic. Deaf truckers can feel a tire blowout by the truck’s vibrations. Advancements in communications mean that most Deaf truckers use either the ELD/VP(videophone relay) or email and text. “When I go to a shipper, I either speak, write on paper or else just show them my load info from my phone,” she says.

Mostly, she loves her job and wants to be known for her professional skills.

“All we ask is for the public (to) have an open mind and to view Deaf truckers as an equal to any other trucker. She quotes from DTU’s motto:  “It’s all about the skills, not the hearing.”

From Welder to Trucker 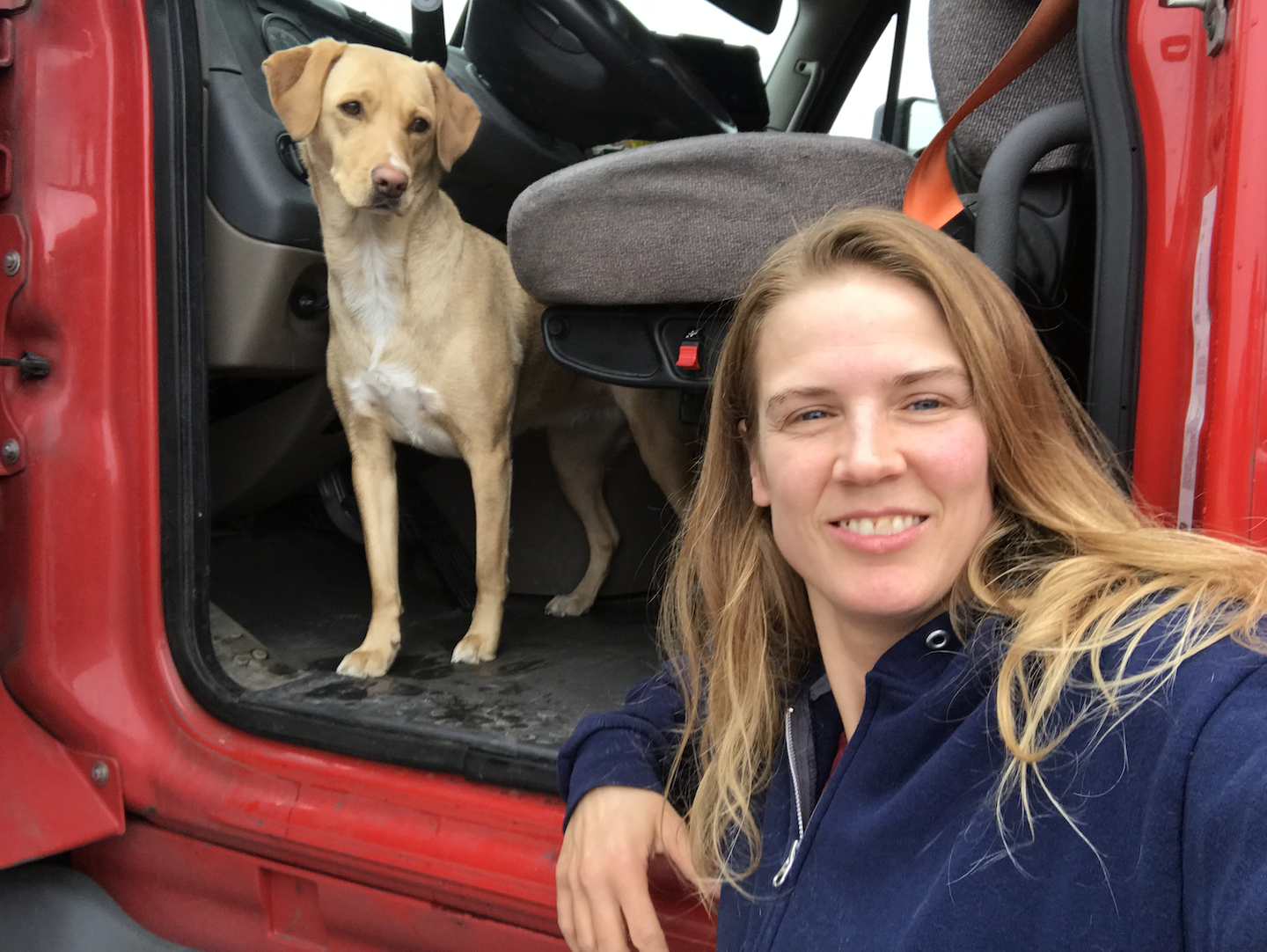 Sandy Sloat, 39, knew she had the chops to become a truck driver. After all, she had been a welder in Alaska, working with heavy-duty equipment in extreme conditions. Born deaf and raised in a family who are also deaf, she always felt like she could do anything she set her mind to. While she liked the hard work of welding, she always wanted to drive big rigs. In Alaska, at the time, that was not an option.

When the rules changed in 2013, she moved to Texas after her friend became the first Deaf trucker to get his CDL in Amarillo. He introduced her to the CDL teacher at Amarillo College who encouraged her to enroll. She used an interpreter during school and passed all the requirements for her CDL. The testing process is difficult for most Deaf truckers because of having to use an interpreter in the back of the cab during the driving portion. “You can’t take your eyes off the road to turn around and communicate via sign language.” But they figured it out by using a mirror and she passed the exam.

However, finding fleets to work with and then get through the training program with trainers who had no experience with Deaf truckers was even more difficult, Sloat says. 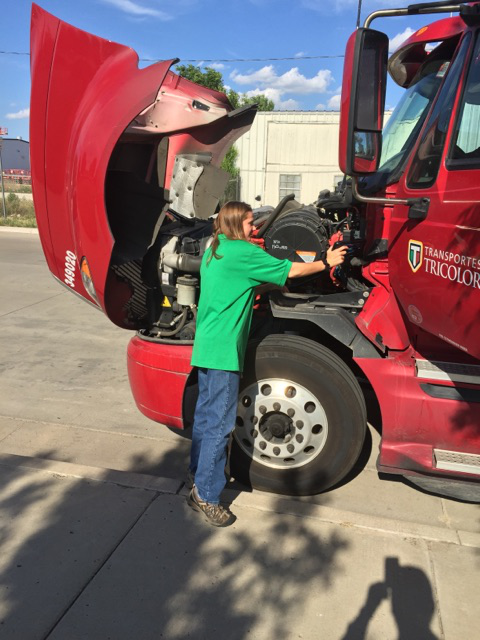 She’s been driving for more than five years now, and after some hits and misses with other fleets, drives for Crete Shaffer. Like Helgerson, she relies on DTU for support and is an active member of the Facebook group. Her advice for deaf people who want to become truckers is to ignore the ones who say it’s not possible. “They will try to put up barriers. You are not only a woman but a Deaf woman. Don’t listen to them. Just do what you want to,” she says.

As far as hearing truckers go, she asks to be treated like they would like to be treated. “Make eye contact with me. Don’t worry, you don’t have to apologize to me for my being deaf,” she says with a laugh.

Sloat, who has her green belt in Karate, says she’s not worried about her personal safety on the road and makes sure she aware of her surroundings at truck stops. “I’ll see it before you hear it,” she says. And that applies to her driving as well. “I’ve seen distracted hearing truckers run through red lights and feel like as a Deaf trucker, I’m way too alert to do,” she says.

Through it all, she remains optimistic about her trucking life and is grateful for the opportunities she’s experienced.

The positive attitude of Deaf truckers like Helgerson and Sloat is what attracted Autumn Daniel, a certified CDL instructor, and ASL interpreter, to interpreting for Deaf drivers. She comes from a truck driving family; her dad drove OTR for 40 years, and her mom drove OTR with him for 20 of those years. Her dad was also a trainer and she grew up around trainees. When she got her certification to interpret for the deaf, she jumped at the chance to work with Amarillo College Truck Driving Academy. Since 2016, she has used her knowledge of truck laws, culture and regulations to help 10 drivers earn their CDL, making Amarillo College one of the nation’s leading schools for Deaf truckers.

In fact, she loved it so much, she got her CDL and says she can now teach Deaf drivers from the front seat of the truck. “The trucking industry is a favorable one for anyone with the motivation and aptitude to do it. Simply put, your hearing is just not as important as your other senses in a truck, especially with the advent of cellular devices, Qualcomms, and other technology. While there are situations where hearing is a benefit such as at scale stops, the lack of hearing is not a hindrance. It is merely a challenge, needing to be met with simple solutions while on the road,” she says.

Before 2013, the U.S. Department of Transportation required that drivers be able to hear “a forced whisper at not less than 5 feet in the better ear with or without a hearing aid.” In 2013, the DOT began giving exemptions to deaf people after an extensive study commissioned by the FMCSA in 2008 concluded that there was no increased safety risk for Deaf truck drivers. At that time, 40 Deaf truck drivers were granted exemptions and the organization Deaf Truckers United estimates there are approximately 900 Deaf truckers.

This group, founded in March 2011 with a handful of members, has more than a thousand members and an active Facebook group. Their mission is to help guide deaf people to acquire their commercial driver licenses and begin a successful trucking career. They are focused on the future Deaf truck drivers and the general public who want accurate information about Deaf truckers. The website includes step-by-step hearing wavier procedures for new and renewal applications.