Trucks of the future to run on electricity?

You’ve passed them on the highways as you drive: four-wheelers in cars like the Nissan Leaf, Chevy Volt or the Tesla, all of which are powered — at least in part — by electricity.

Think the truck you’re driving could be next? Is it possible that when you take a break at a truck stop in the future, instead of pulling up to the diesel pump, you’ll plug into a charging station?

One of the founders of Tesla, Ian Wright, is counting on it. His San Jose, Calif. company, Wrightspeed, is developing electronic powertrains for trucks, and wooing companies that want to save on fuel while meeting growing emission standards. The price starts at $150,00.

They consist of and electric engine, battery system and a generator that runs on diesel or natural gas and recharges the battery when it’s needed. 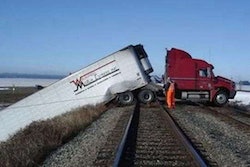