Old school Ford stands out at truck show, on the road

Chris Gornik is not your typical trucker, and his is not the truck you expect to see on the highway or lined up at a truck show.

The 38-year-old from Franklin Park, Ill. is the exceptionally proud owner/driver of a bold 1988 Ford CL900 black-on-black cabover he calls “The Beast.”

Gornik himself is decidedly punked out with numerous piercings, tats, basic black — like his truck — wardrobe and a jokingly edgy outlook. (He smiles and flips off the guy taking his photo at the recent Walcott (Iowa) Truckers Jamboree.)

His Ford, which he found in Gary, Ind. using Craig’s List, is totally old school. Gornik calls it “badass,” and loves its simplicity: “Less is more in my way of thinking.”

Gornik was born in Poland but came to this country with his parents in 1994. They arrived in New York City but eventually settled in suburban Chicago. He has been driving truck for the last 18 years.

This Ford does double duty for Gornick. He hauls with it, but it can also be quickly outfitted to tow other trucks for K2 Express.

And, while it might be the typical show truck, the judges at Walcott liked it a lot. Gornik’s Ford won Walcott’s award for the top cabover in its Truck Beauty Contest. 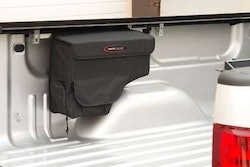 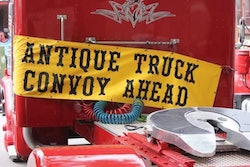