An Indiana trucker was recently recognized for his highway heroics helping a fellow driver last summer.

The Truckload Carriers Association named Joseph Brown, from South Bend, Indiana, a Highway Angel for stopping to help a driver after his tractor-trailer was overturned in a heavy rainstorm last summer. 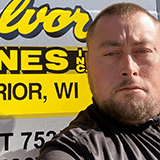 On Aug. 10, Iowa was hit with a driving rainstorm carried along by 99 m.p.h. winds. Brown was on I-35 in rural Iowa and headed north toward Minneapolis. “It was getting really bad out,” he said. “I’ve never driven in anything like that. You could barely see 20 feet in front of you.” He slowed down and pulled over for a few minutes, but the winds were pushing the truck. “A lot of trucks and cars were passing by,” he said.

Brown decided to get back on the road. He was thankful for the extra weight of the load he was hauling. He went a little farther down the road and saw an overturned truck with the cab lying on its passenger side in the right lane. Brown pulled up about 20 feet from the truck and put his flashers on. He wanted to protect the overturned cab from traffic. “Trucks were flying by him and cars were going around. I wasn’t sure it was safe to get out.” He sat parked for a couple minutes and then the rain let up.

“I decided to check on the driver,” said Brown. “I didn’t want to hesitate any longer.” He found the driver standing up inside the cab. He had been able to maneuver from his seatbelt. “He was standing there wet. I offered to have him come and sit in my truck,” Brown. “He said he’d been driving for 20 years.” Although the driver didn’t have any visible injuries, he told Brown his shoulders were hurting from the seat belt. He had already called 911. As they sat there, Brown was worried about someone hitting them. “You couldn’t see 5 feet in front of you at one point. I was relying on my flashers so we wouldn’t get hit. It was too windy to put triangles out.” Flares would have been extinguished by the wind and rain.

The two men sat there for half an hour. Brown said the fire department was the first on the scene. EMTs assessed the driver and put him in an ambulance. Brown and the driver have stayed in touch. “There’s a lot of good drivers out there,” he said. “We gotta look out for one another.”

TCA has presented Brown with a certificate, patch, lapel pin, and truck decals. His employer has also received a certificate acknowledging their driver as a Highway Angel. 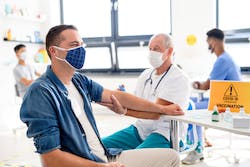 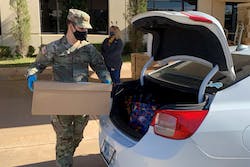 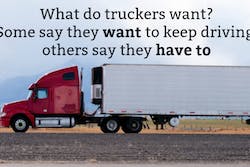