Closed since early May when a major crack was found in supporting steelwork, the bridge that carries Interstate 40 over the Mississippi River between Arkansas and Tennessee is expected to reopen in two phases next week.

The reopening plan calls for all eastbound lanes to reopen Monday, Aug. 2 by 6 a.m. Central Time. Westbound lanes will reopen sometime Friday, Aug. 6; the exact time will be announced. ARDOT cautioned that this is the plan for reopening "barring any complications." An update is expected to be posted Friday, July 30.

The announcement was made after load testing was conducted today.

Tudor said contractors will complete all of the current phase of work by Friday, July 30. They will begin to remove equipment and barriers starting with the eastbound direction. Plans call for this work to be done one side at a time "to maintain the safest scenario for the workers," according to ARDOT.

“The success we are celebrating today is a result of amazing collaboration and effort by the team that was formed immediately following the closure," said Tudor. "We thank (the Tennessee Department of Transportation) for their excellent leadership of the team in reopening the bridge in record time. We also thank the public for their patience.”

On May 11, an ARDOT consultant discovered a crack in the bottom side of a bridge truss during a routine inspection and immediately shut down the bridge. Since then, traffic has been rerouted primarily to the Interstate 55 bridge between the two states.

Trucking suffered significantly during the I-40 bridge closing. It is a major freight route, accommodating some 12,500 trucks a day, and it was estimated early on that the shutdown was costing the industry as much as $2.4 million a day. That amount was reduced to less than $1 million a day as truckers and other traffic adjusted to the closing and detours. 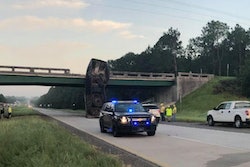 I-16 bridge struck by truck being demolished; expect traffic troubles