Here are five important things you need to know about Super Bowl 50, which takes over American hearts and minds this weekend:

But, if you’re trying to stick to a healthy eating plan while cheering on the Denver Broncos or Carolina Panthers, there are alternatives to pizza and beer. Here are a few suggestions:

Spicy Popcorn. Once you pop up a batch of popcorn (pop your own or grab some low-sodium, low-fat microwavable stuff) coat it with garlic powder, cumin, paprika, and cayenne pepper.

Baked Sweet Potato Fries. Just slice the sweet potatoes thinly, coat with a little olive oil and sprinkle on cumin and paprika (and you can spice them up with some cayenne like the popcorn) and bake in the oven, flipping halfway through.

Baked Buffalo Wings. Skip the deep fat fryer and go straight to the oven with your wings. Once they are, as Alton Brown would say, “Golden brown and delicious,” coat then with this spicy sauce.

Buffalo Cauliflower. If you want to be really good on your healthy eating plan, this is like Buffalo wings without the wings. These are just baked with a sauce that would make the folks at the Anchor Bar jealous.

The again, you could just say, “I’ll be better tomorrow …” and go for this: Buffalo Chicken Poutine! 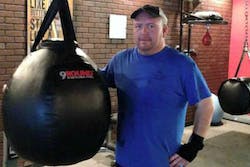