The Department of Transportation (DOT) has once again pushed back the forecasted publication date of its preliminary Safety Fitness Determination rule.

In its monthly update, the DOT projects the rule will be published June 17 — nearly three months after the date projected in the DOT’s November report and nearly two years behind the Congressionally required deadline set in 2012’s MAP-21 highway funding law.

The rule will allow the agency to produce absolute scores for carriers (rather than percentile rankings like in CSA’s Safety Measurement System) using data similar to the set used to produce SMS rankings. The rule has been in the works since 2007.

The DOT also reported it has pushed back the projected publication date for a proposed speed limiter mandate.

The proposed rule, now projected to be published April 16, would require installation and use of speed limiters on heavy trucks. FMCSA has not indicated what the proposed limited speed would be.

Other rules in the DOT’s update include

(1) rule to prohibit coercion of drivers, scheduled to be published as a Final Rule Sept. 10

(2) a Final Rule mandating the use of electronic logging devices, scheduled to be published Sept. 30

(3) the CDL drug and alcohol clearinghouse rule, scheduled to be published as a Final Rule Oct. 30. 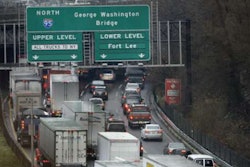