Updated: 3 trucks trapped in I-70 avalanche 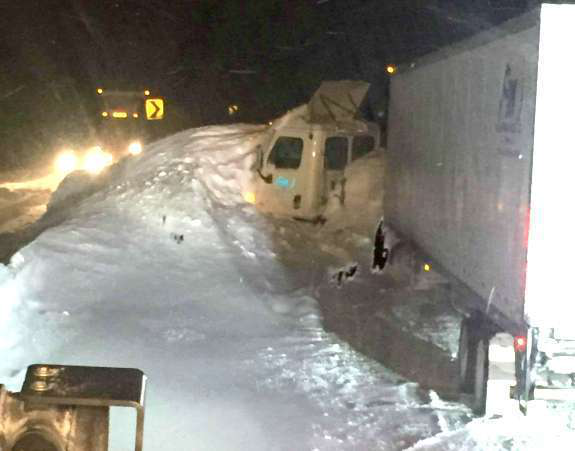 Colorado DOT photo of truck trapped in I-70 avalanche

UPDATE: 4:30 p.m. Central – Colorado DOT says I-70 has been reopened in both directions after crews were able to conduct avalanche control work throughout the day Tuesday. The agency cautions drivers to expect slower speeds on the Vail Pass.

If you’re on or headed to I-70 in Colorado, be aware it’s closed in both directions by an avalanche, in which three trucks were trapped. Here’s what the Colorado Department of Transportation posted on its Facebook page this morning:

“I-70 is closed both directions on Vail Pass due to an avalanche across the Interstate in the area known as the Narrows. Three semis were caught in the slide but no injuries reported.

“Crews are on-scene working to punch through the slide path in order to clear the semis.

“The closure is in place eastbound at Exit 180/Vail and westbound Exit 195/Copper Mountain.

“Exit 133/Dotsero Commercial Vehicle (CMV) truck parking has also been implemented. No ETO at this time.”