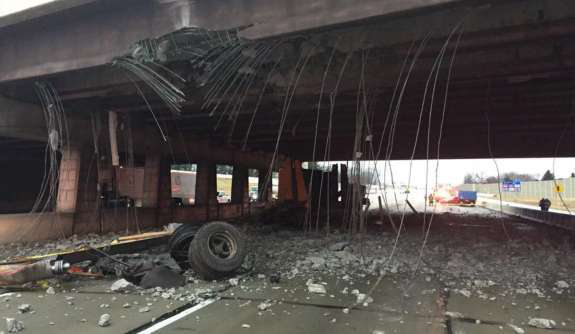 Wayne Township Fire Department photo of crash on I-465

A tractor trailer said to be carrying cars to be compacted at a junk yard struck an overpass on I-465 this morning, closing northbound lanes of that interstate at I-70.

Debris fell on the highway and several cars; one driver was injured. The driver of the truck was unhurt, according to media reports.

Indiana State Police told the media drivers should expect major delays. While the Indiana Department of Transportation didn’t say how long the interstate would be closed, they suggested drivers should expect a closure of significant length. Media reports says eastbound and westbound traffic on the Rockville Road bridge was being diverted because the bridge is closed.

State police have not determined the cause of the crash.