A man who stole a semi truck from a trucking company in Sharonville, Ohio took police on a more than 100-mile chase to Alexandria, Kentucky, where he abandoned the vehicle after a crash and escaped on foot. At the time of publication, the suspect is still at large.

The semi was stolen from AC Trucking & Warehousing in Sharonville in the early morning of Tuesday, Aug. 7. The manager was able to track the truck via GPS, and the police chase ensued.

At one point during the incident, the truck thief took the stolen truck to a John Deere dealer in Pierce Township and loaded it up with five pieces of equipment with a value of $80,000.

In a media release, police said the subject deliberately attempted to hit civilian and police cars. The suspect intentionally swerved across the median into the northbound lane of U.S. 27 and drove straight toward a police vehicle with its emergency lights on. The officer driving that police vehicle was able to avoid the crash by going across the median into oncoming traffic.

The suspect continued to drive the stolen semi into head-on traffic and plowed into a second police vehicle before coming to rest against a guardrail.

“Officer Carl Harris, the driver of the CCPD vehicle struck by the semi, was starting to exit his vehicle to provide traffic control when the semi drove straight towards him. He was able to run toward the median of the roadway and avoid being struck,” said Chief Craig Sorrell of the Campbell County Police Department.

Chief Sorrell said that the suspect will face an attempted murder charge when they’re apprehended.

The suspect is described as a white male, believed to have a blonde buzzcut and wearing jeans and an orange shirt. He fled into a densely wooded area and a search involving officers, dogs, and a helicopter was unable to locate him. 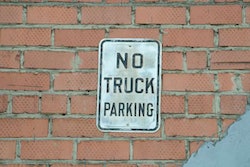 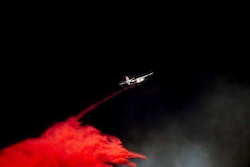 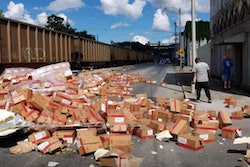 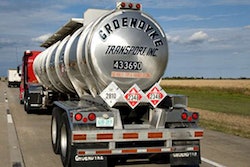