Adam Seger washed the windshield of his truck at a Love’s in Upstate New York this afternoon unaware that some truckers elsewhere had parked their trucks or were engaging in other forms of protest.

“Sounds like a good cause,” said Seger, a company driver, when told about the work stoppage promoted by the Facebook group Black Smoke Matters and others. “But, I’ve got money to be made.”

Money and drivers’ ability to make it with less of what they consider to be government interference is at the heart of the day’s trucker shutdown and other protests. Organizers seek changes in regulations covering hours of service and electronic logging devices. They also want more parking, better driver training and a more direct role in the regulatory process.

Like Seger, Bob Prusak was not familiar with the protest. He too had work to do, and when told that the protest was in part about electronic logging devices, the company driver with 24 years on the road shrugged.

“I’ve been on an electronic log for a few years,” he said standing in near the fuel island of the Love’s just off Interstate 81 in Binghamton, New York. “They make it easier. Guys just have to get used to them. They’re just something new.” And, with that, Prusak was off to finish his work week.

While making a quick stop at the TravelCenters of America location in Tuscaloosa, Tallahassee, Florida-based trucker Terrance Bryant said he’s been trucking for five years and there’s not much that he lets frustrate him anymore. Bryant hauls a tanker for Ryno Trucking. His biggest concern in his job, he says, is traffic.

“I just take it as it comes,” Bryant said. Even so, he acknowledges that shutting down is a way for drivers to make a statement.

Mississippi truck driver Siedah White, who pulls a dry van for Schneider, was also passing through the Tuscaloosa TA. She wasn’t familiar with the shutdown, but did express concerns about parkings and hours of service. It’s hard to find somewhere to park after 3-4 p.m., White said. She also thinks truck drivers need more hours flexibility.

“Like yesterday, something was happening on I-20 and I was leaving Georgia, and I stood in traffic for three hours so I lost three hours because I was in traffic,” White said.

At the Love’s Travel Stop in McCalla, Alabama, truck drivers Robin Wigginton and Michael Roberts expressed similar sentiments. Neither was familiar with the truck driver shutdown, but each had their own concerns about the challenges they face as drivers.

Wigginton, from Muscle Shoals, Alabama, drives for Sawyer & Finn. He says there’s a need for more and larger rest areas to help ease parking concerns. He’s had to use personal conveyance some just to find a place to park.

“We need more places to park. Everyone is having to run illegally now because we have ELDs and everyone has to shut down at a certain time, and there’s nowhere to park,” Wigginton said.

Shippers and receivers that take their time loading and unloading can eat up half a drivers day, Wigginton said. Owner-operator Michael Roberts, from Georgia, agreed, saying “we don’t have any flexibility anymore. You get held up at shippers.” This can throw off a driver’s hours and complicate their trip planning.

“We’re the only people under the control of hours, where everyone else can do what they want. If they can control the shippers and receivers then we can do our jobs,” Roberts said.

Our colleague Overdrive Senior Editor spoke with several drivers about the shutdown, and he writes:

Chi-Town Large Cars club co-founder Kris Santoianni heard the early calls for a shutdown April 12. “I put it out to club members when folks first started talking about it,” he says. For many members, it presented an opportunity for a meet-up beyond Chi-Town Large Cars’ annual truck show, their principal gathering.

“I guess we’ll mess my house up,” Santoianni told them at the time. When Overdrive spoke with him the afternoon of April 11, he was headed that way at the tail end of a run in the 1999 Peterbilt 379 he drives for a two-truck owner leased to an 18-truck carrier. “We have members coming in from all over the place, probably 20-30 people from out of town.” He planned a visit to a local grocery after he arrived back home to stock up for what will essentially be a party, plenty of time to talk, swap stories and ideas, and make a day and more of it.

Santoianni views any effectiveness of this shutdown as having the potential to demonstrate some unity among drivers, whose voices in regulatory and industry discussions don’t always rise to the top.

Small fleet owner Daniel Davidson has not shut his approximately 20-truck business down but did leave it up to drivers as to whether they wanted to participate. “I’ve got five guys shut down,” he says, though he was skeptical numbers would be sufficient enough to make any kind of big statement. He’s looking ahead to October and the planned second edition of “That’s a Big 10-4 on D.C.” on the National Mall, personally.

For Santoianni and others, though, the shutdown is not all about government-engagement efforts. “Freight’s taken a beating” this slow season, with the typical Spring uptick not exactly showing signs of arrival, he says. “The money’s taken a beating. Not 10 minutes ago I got a call from another guy getting ready to sell everything and find a company job,” he adds on an owner-operator friend.

Drivers of about 20 trucks in a “slow roll” protest in Chicago had their plans of rolling into the downtown and past Trump Plaza blocked.

The Chicago Tribune reports Illinois State Police and Chicago Police blocked the exits of the Dan Ryan Expressway, prompting the trucks to continue on to the Federal Motor Carrier Safety Administration building in Matteson. Police said it was unsafe to have that many large vehicles downtown and at least one street, Michigan Avenue 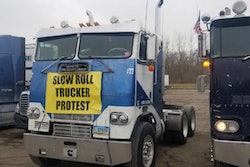 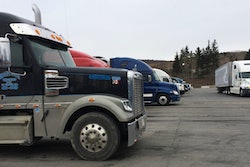 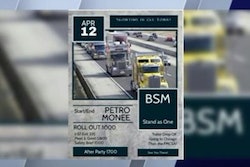 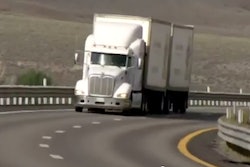