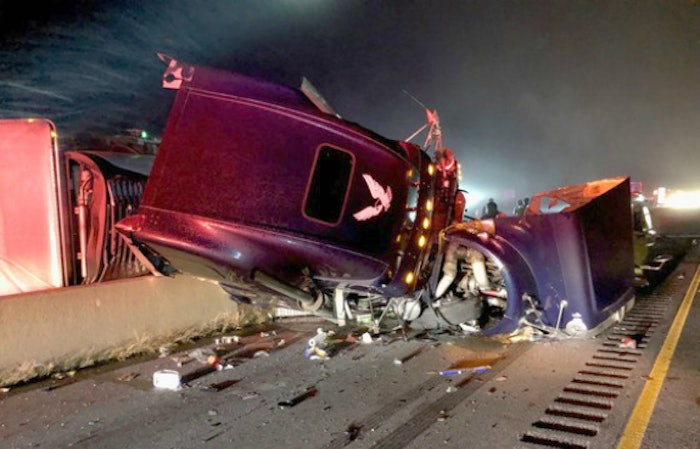 A one-vehicle crash in Indiana Monday, Sept. 16 spilled a truck’s sticky, sweet cargo across the westbound lanes of Interstate 94.

Indiana State Police say the tractor-trailer owned by RockFord Carrier out of London, Ontario, Canada crashed at about 9:30 p.m. at mile marker 45 about a half a mile west of the Michigan-Indiana state line. It spilled its cargo of 44,000 lbs. of Nutella hazelnut-cocoa spread.

The troopers report that the driver, Chuhar Singh, was westbound on I-94 when a car in front of the 2003 Freightliner “slammed on his brakes.”  A statement from the troopers said this caused Singh to brake hard and steer left, he then lost control and left the roadway to the north, came back across all westbound lanes and struck the concrete median barrier wall head-on.  This, said the troopers, caused the tractor-trailer to overturn over the barrier wall onto the inside shoulder of eastbound I-94.  The trailer stayed on the westbound side blocking all three lanes of traffic.

The troopers say Singh was not injured.  The westbound lanes of traffic were closed for about two and a half hours.

The trailer was moved to the shoulder where it was to have been unloaded Tuesday, Sept. 17.

The troopers did not say if any citations were issued.