A Michigan man was injured on the Ohio Turnpike last week when his car became wedged under a moving tractor-trailer. Meanwhile, a trucker was injured while trying to help a stranded motorist and tractor-trailer fell off a Texas interstate onto another highway.

Trapped under trailer, man’s car struck by another truck

A 31-year-old man from Ypsilanti, Michigan was seriously injured after the car he was driving was crushed between two tractor-trailers early Friday morning, Nov. 1, on the Ohio Turnpike about 35 miles west of Cleveland.

The Ohio State Highway Patrol said the man was driving a Ford Focus eastbound when he struck a moving tractor-trailer near mile marker 135 in Lorain County. Police say the car became stuck underneath the trailer. The tractor-trailer pulled over to the side of the highway, but a second truck struck the rear of the Ford.

The car’s driver, who was not identified by police, was flown to a hospital in Cleveland. The Akron man driving the first truck was uninjured. The Maple Heights, Ohio resident driving the second hurt his shoulder but refused medical treatment, according to the Highway Patrol.

Neither trucker was identified by police.

A truck driver who stopped to help a motorist change a flat tire was seriously injured in San Antonio, Texas Saturday, Nov.  2 by a hit-and-run driver.

The unidentified trucker stopped to help a woman whose car had a flat tire on Interstate 35 at about midnight.

KENS-TV reports that while the truck driver was changing the tire, a car traveling southbound hit both the trucker and the woman he was helping on the side of the interstate. The car’s driver fled the scene.

The truck driver and the motorist he was helping were taken to a nearby hospital. Police continue looking for the driver involved in the crash.

Tractor-trailer crashes off interstate, lands on another highway

Police continue their investigation of an accident Thursday, Oct. 31, in which a tractor-trailer left a Texas interstate and landed on another highway.

The Texas Department of Public Safety reports the tractor-trailer left southbound Interstate 35 north of Laredo, Texas, drove off a bridge and landed on U.S. 83 at about 6:30 a.m.

Police say the truck’s driver sustained minor injuries in the crash that occurred near mile marker 18 in northern Webb County. 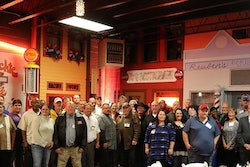 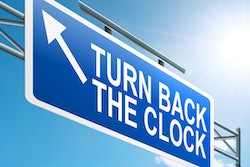