A Louisiana trucker was recently honored for helping a fellow driver whose truck rolled over on Interstate 20.

The Truckload Carriers Association has named Evert Gott, from Lacassine, Louisiana, a Highway Angel for aiding another driver who was injured after his truck rolled spilling hot asphalt. Gott drives for Groendyke Transport.

The TCA explains what transpired:

It was mid-afternoon on May 1, and Gott was heading to Fort Worth, Texas when he saw a dump truck carrying hot asphalt rollover in the eastbound lanes of Interstate 20 outside Vicksburg, Mississippi. “He was going into a curve, blew a tire, lost control, and flipped over. The guardrail stopped him,” said Gott.

Gott pulled over as quickly as he could and ran back to the scene. “By the time I got to the truck, he was barely walking and trying to move around the front of the truck toward the guardrail.” Asphalt had spread all over the road and in the truck. “I helped him to my truck to get him in the shade where he could sit down.” He gave the man a bottle of cold water. A police officer arrived and called an ambulance.

The injured driver’s wife arrived before emergency vehicles. She thanked Gott several times for stopping and helping her husband. Gott stayed at the scene for over three hours until the cleanup was done. “The asphalt had spread from shoulder to shoulder, about two inches thick all across the highway,” he said. “I couldn’t move until they were done.”

For his willingness to assist a fellow driver, TCA has presented Gott with a certificate, patch, lapel pin, and truck decals. His employer, Groendyke Transport, has also received a certificate acknowledging their driver as a Highway Angel. 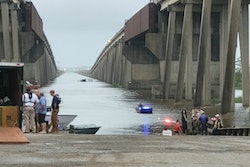 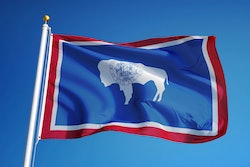