Prize-winning driver encourages girls to follow in her footsteps

Stephanie Klang is not the most likely person to wear a sparkling tiara. But, with her gorgeous smile and silver hair, she pulls off princess like she was born to the throne. The Joplin, Missouri-based CFI driver is the 2017 Overdrive’s Most Beautiful winner and she’s thrilled to represent trucking to young girls and women who may have never considered it as a career option.

I was there to interview her, coordinate her photo and video shoot with CFI’s Dan Allison, see her recognized before her peers, visit her home and accompany her to a Girl Scout meeting. The crown was almost out of place, considering that Klang is down to earth about her work and eager to give more than she receives.

At a CFI safety meeting, Klang was presented with an armful of pink roses. She spoke about how hard work and attention to safety brought her to this point. And then she proceeded to give all the women in the audience a rose from her bouquet.

Klang gives CFI credit for taking her on as a solo driver after her former husband left the company. Other companies where they had driven team considered her his “little helper,” but CFI saw her as a safe, strong driver. They were thrilled to sign her on.

The financial stability and independence she’s enjoyed through her CFI career is a common theme when she speaks to Girl Scouts and other student groups. She wants young girls to see an example of a woman succeeding in what some still consider a man’s world.

When she spoke to 7- and 8-year-old Girl Scouts, they listened with bright eyes as she showed on a U.S. map all the places she had been.

“I want to expand their world,” she tells me. She doesn’t mention that she pays for all the crayons and coloring books she distributes to them.

Klang also likes to tell young women about the significance of their choices. “You can acquire a skill that’s always in demand,” she says.

In fact, she credits trucking and CFI with giving her a path out of poverty. “I tell the girls that becoming financially independent is true freedom,” she says. Her home is paid for and she’s accrued a nest egg based on years of steady employment and benefits. She talks to young women about how much shame she felt as part of a family dependent on food stamps and welfare. “After every talk, someone will linger afterwards and tell me their story,” she says.

After three decades and more than three million safe miles, she’s cutting back a little. “I’m trying to limit myself to about three weeks out at a time,” she says. That’s so she can visit schools, work with scouts and make positive trucking image appearances wherever she’s needed, as she often did when she served as a captain on America’s Road Team, an image outreach of the American Trucking Associations.

One of Klang’s next gigs will be at The Great American Trucking Show in Dallas, Texas, Aug. 24-26. She’ll receive a makeover, pose for a photoshoot next to an Overdrive Pride & Polish truck, sign autographs, meet attendees, give out trophies and continue to represent all that is good about trucking.

A frightening brush with suicide by truck

It was Sept 9, 2001 and I was on I-35 south of San Antonio, heading home at 6:30 in the morning. I was laughing with a radio program on NPR when suddenly a car pulled out on the frontage road and then crossed the road.

I moved left and my right steer tire went over the hood of the car. The truck jackknifed and I held onto the steering wheel, trying to keep control. When I came to a stop, I was belted in and people helped me out. Fred, my cat, was in in his carrier and they helped me get him, too.

I thought, Oh, my God, what happened?
Later I read in the accident report that the kid was 23 years old and had told his family he was going to kill himself. He had just gotten back from rehab and was distraught. He took the car and they followed after him. He was waiting for the first semi and it happened to be mine.
CFI was great and gave me a lot of support. I learned that you may think you are in control, but sometimes you are in the wrong place at the wrong time. I wasn’t angry with him for what he did, I just did what I do. I got back out there and started driving. But I always look at situations that don’t seem right and wonder what’s going on. 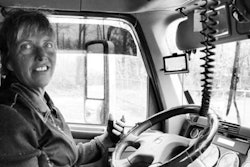 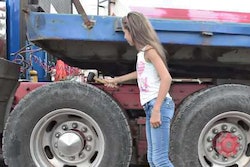 Girl trucker: ‘I feel strength when I drive the truck’ 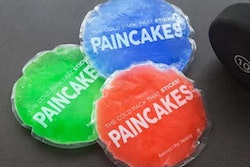 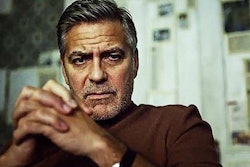