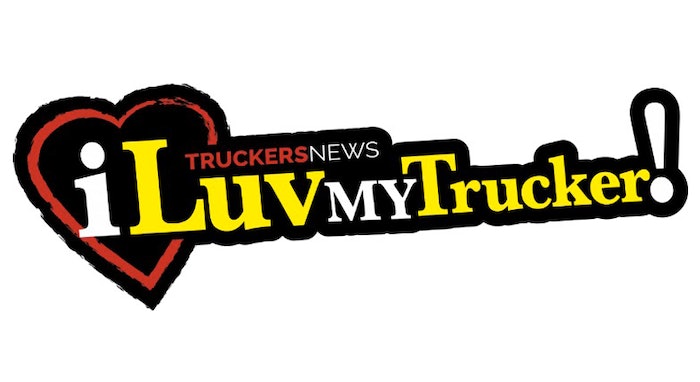 A year ago, leading up to National Truck Driver Appreciation Week, we asked folks to tell us about the most important trucker in their life for i Luv My Trucker!

Julie Clark said of her truck-driving husband James, “My husband has worked hard since he was a little boy. He’s dedicated to what he does. He gives his all in what he does, even if he’s sick, tired or the weather is bad. His famous words are, ‘I have a job to do.’

Jamie Boyd wrote of his wife Shanell Hallmark, “There are many reasons I love my trucker. She is not only my wife but the mother of our wonderful son. She’s been a trucker for 13 years and though things get tough, she hasn’t given up … not on the career, not on the people, and not on the industry!”

And, Tiffany DeSilva said of her husband Aaron, “Facing the long hard hours knowing that he will be pushed to his limit and tired. Why? Because my trucker puts those he loves before himself. It’s not only a true love but a selfless love and genuine concern for our family’s future.”

National Truck Driver Appreciation Week is but a few days away, Sept. 8-14 this year. Truckers News and She Drives is once again asking folks to tell us about the trucker they luv. We’re asking folks to send in what we like to think of as “trucker valentines” as we once again hold “i Luv My Trucker.”

As we have in the past, we’re asking friends, spouses, kids, parents, significant others, co-workers and others to tell us about the trucker they love and why. All they have to do is fill out a form online and send us a picture of the trucker they luv. We’ll post most as they come in and then publish the best ones during National Truck Driver Appreciation Week and beyond.

And, we’re buying lunch for the truckers who are luved in those five best entries. We’ll send $25 Subway gift cards to those five well-luved truckers.