Lori Broderson sat in a folding chair off to one side watching as her husband Mitchell guided the judges around their white and black 2007 Western Star Lowmax Harley-themed “Live to Ride” at the Great American Trucking Show (GATS) in Dallas. They were appraising the truck in the working bobtail division of the Pride & Polish show, which concludes with the results announced Saturday.

Lori said she always has butterflies in her stomach watching their working truck with 960,000 miles on it being judged. But there are more butterflies and they flap especially hard at GATS.

“This show is very particular,” said Lori, who just got her CDL. She said she plans to share driving duties with her husband.

But, she said she is sure their truck will stand out among the 66 entries at the show.

“We love our truck because it’s different,” she said. “You don’t see a lot of Western Stars in these shows.”

She comes by her affection for the Western Star brand honestly. Lori said her father and grandfather both drove Western Star day cabs.

Mitchell – and soon Lori as well – is a dedicated driver for Quality Carriers out of Tampa. He makes three or four weekly runs between Peoria, Ill. And Lima, Ohio.

Just down the showfloor from the Mitchells, James and Melanie Nixon and their son Riley, made a slow stroll through the trucks lined up at the Kay Bailey Hutchison Convention Center.

James, who lives in Texas, hauls cattle between south Florida and the feedlots of Kansas.

When asked which show truck he’d like to drive out of the convention center, James didn’t hesitate in choosing Dan Bruebaker’s black and green 2014 Peterbilt “All In” with a 2015 Wilson livestock trailer. 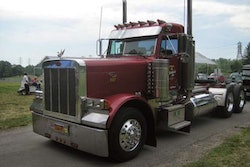 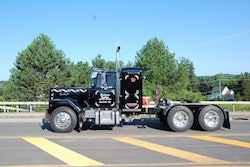