Chevrolet today introduced the Colorado ZR2 concept – a vision of how Chevrolet could take the all-new midsize truck’s off-road capability to the next level.

It also showcases the new 2.8L Duramax diesel engine that will arrive in the Colorado lineup later next year.

The aggressively styled concept builds on the capabilities of the production Colorado Z71 and advances the legacy of Chevrolet’s previous ZR2 production models.

“From the bold stance to the trail-ready special equipment, the Colorado ZR2 is all about the fun of driving where the pavement ends – and doing it in characteristic Chevy style,” said Tony Johnson, Colorado marketing manager.

“Chevrolet has a heritage of the ZR2 representing the ultimate in production-based off-road capability and we’ll gauge the public’s interest in this concept as we continue to explore the possibilities for the all-new Colorado.”

The Colorado ZR2’s imposing stance is four inches wider than a production Colorado Z71, with features including new front and rear fascias designed to increase approach and departure angles when driving off road.

Ground clearance and rough terrain are handled with a two-inch lift and integral skid plates, while the wider track helps enhance stability in potentially unstable situations.

The Colorado ZR2’s greater approach and departure angles – 30.7 and 22.7 degrees, respectively, versus the Z71’s 25/21 degrees – are enabled by all-new off-road fascias that drastically reduce front and rear overhang.

“The design of the ZR2 concept is all about functionality,” said Johnson. “It is inspired by the needs for traversing rock-strewn trails, as well as the aesthetics of competition-style vehicles such as pre-runners – with all elements contributing to safe, sustainable off-road driving.”

The reservoirs for the front shocks are accessible and mounted in the wraparound portion of the front fascia, while the capability of the shocks is matched with all-new front control arms.

The center section of the wheel design has a raw aluminum appearance with black accents, while the bolt-on bead lock cover is orange-anodized aluminum.

A matching spare wheel/tire assembly, with a quick-release handle, is mounted in the bed. The bed also features the protective spray-in bed liner available with production Colorado models, GearOn™ accessories and a 48-inch Hi-Lift jack – all necessities for the trail.

Additional exterior elements include an all-new grille and headlamp housings with blacked-out accents. The power dome-style hood is unique and echoes the design cues of Chevrolet’s Duramax-powered Silverado heavy-duty trucks.

Inside, the concept off-roader features the same blend of capability and comfort found in the production Colorado Z71, with ZR2 logos embroidered on the front-seat headrests and embossed in the custom Chevrolet Accessories-based floor liners.

The ZR2 logo is featured on the instrument cluster display, as well as a custom inclinometer that shows degree of incline from front to back, and side to side.

Additional electronic accessories have been added to the center stack to make the Colorado ZR2 a true off-road warrior.

Incorporated into the piano key bank is AUX toggle and four additional toggles: two for winch in and winch out operation; and two for the electronic front- and rear-locking differentials.

The 2.8L Duramax diesel is part of a new, global family of turbo-diesel four-cylinder engines designed to deliver more-efficient capability. It features a variable-geometry turbocharger for optimal power and efficiency across the rpm band and a balance shaft for greater smoothness. 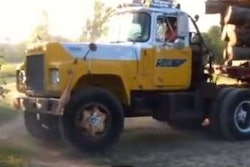 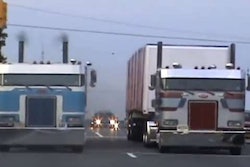 handsome Peterbilt COE’s on the road 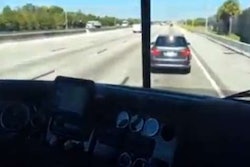 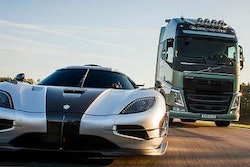