Not since Chuck Norris and Nolan Ryan has it been this cool to be a Texas Ranger.

The Ram Truck brand has unveiled a one-of-a-kind Texas Ranger concept truck to commemorate and promote their partnership with the law-enforcement agency and the Texas Ranger Hall of Fame and Museum.

Although the Ram Texas Ranger edition was designed as a one-of-a-kind concept that will tour Texas and help build awareness for the Texas Rangers Hall of Fame and Museum, Ram officials have not ruled out a possible production run.

The coin was minted from 1947 through 1948 and was the basis for the first official Texas Ranger star badges. The coin was re-tooled to the star-and-wheel shape worn by today’s Rangers.

The Texas Ranger edition is painted in a Bright White (the color of the good guys) and Bright Silver Metallic for the silver badges.

Canyon Brown and Tan leather and tooled-metal details are borrowed from Ram’s Laramie Longhorn edition, but the truck features plenty of unique extras.

Four Mexican five-peso silver coins inlaid within the wooden portions of the door bolsters. Front doors have the heads side and rear doors contain the tails side of the coin.

Other custom features include: 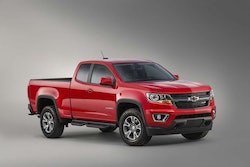