Was Paymaster a truck ahead of its time?

In the past year alone, the global trucking industry has been hard pressed to keep up with the pace of innovation and change cranked out by the major OEMs.

Freightliner unveiled its Inspiration autonomous truck in dramatic fashion in Las Vegas, and showed off its Supertruck at the Mid-America Trucking Show in Louisville last spring.

David Hobbensiefken was an inventor in Portland, Ore. with an idea to change the face of trucks and trucking. The result was what came to be known as the Ryder Paymaster R-100.

It featured an aerodynamic wedge design, and was meant to be less expensive to operate and easy to maintain. Under the hood for most Paymasters was a Detroit 6-71 or an optional Cummins VT-903. The Paymaster sported a Fuller RT-910 transmission.

The engine, transmission, drive axle and exhaust were combined into what was called the “power unit,” which sat behind the truck’s cab.

Hobbensiefken built two prototypes. Ryder liked the Paymaster and ordered 10. Only 14 of the trucks were built before production ended in 1980

Then came the Arab oil embargo and the following an economic turndown, and the Paymaster quickly went from the future of trucking to a curiosity.

One of the few remaining Paymasters is on display at the I80 Trucking Museum in Walcott, Iowa. 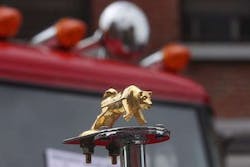 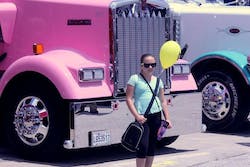 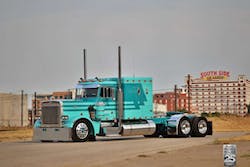 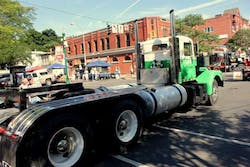