‘Working Class’: Meet the truck and the man

Never underestimate the power boyhood dreams or a summer job.

Colin Stuart spent part of his 16th summer as a janitor at a printing plant, and was fascinated with the equipment he cleaned around. One day his boss drafted him to run a small press and a career was born; several in fact.

Stuart, who would go on to create a business of moving and installing printing presses, is at the Walcott Truckers Jamboree at the Iowa 80 Truck Stop the rest of this week. His massively customized 1984 Peterbilt 359 is entered in the Super Trucks Beauty Contest along with 64 other trucks.

Like most of the trucks in the sprawling parking lot hard against I-80, Stuart’s Pete’ is a working truck, hauling mostly oversized loads (“Anything large and obnoxious,” Stuart says). Unlike most other show entries, Stuart’s “Working Class” sports a 120″ sleeper complete with a working fireplace and airbrushed murals on each side.

And, yes, Stuart did the airbrushing. That’s something he used to do for a truck dealership in Richmond, Virginia back in the 1970s. Stuart says he used to give custom paint jobs on trucks that came in on trade and made them more salable. He hung up his airbrush in 1983.

If ever there was a complete custom rebuild of a truck, it’s “Working Class.” Stuart jokes that about all that’s original on the Pete’ is the VIN and the front axle. And, all the work is his, including marrying two Kenworth Aerocabs for what has become his living room/office on wheels.

“There isn’t a bolt on this truck I haven’t turned,” says Stuart.

What Stuart wound up with was the “dream truck” he drew as a kid.

The jamboree concludes Saturday at 5 p.m. 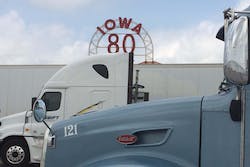 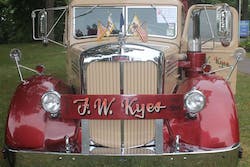 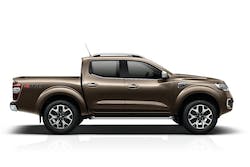 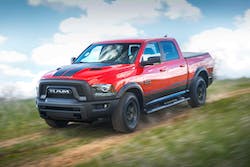