Deanne Winslett
Aug 26, 2015
Trucks are lit up as they drive down the “Parade of Lights.” (Courtesy of Nostalgia Productions, Inc.)

Trucks will come from all over the U.S. and Canada to participate in the show and its highlight event, the “Parade of Lights” across the Mackinac Bridge. In addition to the several vendor booths that will be present, the truck show will also feature a “Dunk Tank.” All donations from the dunk tank event will go to the Navy Seal Foundation.

The northern Michigan truck show is put on by the Richard Crane Memorial Foundation, a non-profit dedicated to raising money through the event to aid in the fight against cancer. The foundation donates a portion of the proceeds to the Helen Moss Cancer Research Foundation.

The foundation was created in memory of truck driver Richard Kirby Crane. Crane opened the American Truck Driving School in Elm Mott, Texas. He drove a truck for Chrysler Corporation and wanted to help people learn truck driving skills as safely and affordably as possible, according to the foundation’s website. He participated in numerous truck shows throughout his life time. 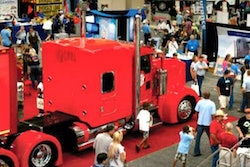