On the third episode of Ice Road Truckers, three of the four drivers stopped to help others in distress, just like many truckers do every day regardless of where they drive. Lisa Kelly, Alex Debogorski and Art Burke all stopped to help others even though unseasonably warm February weather was causing the ice roads to start falling apart just as they have in the previous two seasons.

On his trip to Shamattawa, Manitoba, Debogorski sees something unusual for the ice roads: human footprints in the snow down the middle of the trail he’s on. The ever-observant veteran of the north even notices the footprints are close together and it seems whoever is making them is dragging one foot.

“Strange things are going on,” Debogorski said as he drove on. “I keep thinking I’m going to find a body in the snow.”

What he finds is a man trudging through the snow.

Debogorski stopped his truck and asks, “What’s happening, cousin?” He gives the man a ride and shares some food as they drive on.

Eventually, as Debogorski begins a seven-mile-long lake crossing. He drives with his door open and his passenger looking at him as if he’s crazy.

But, they make it. Debogorski delivers much-needed groceries to the small First Nation village and his passenger gets home.

Lisa Kelly: Move over and let me drive

Last week, a hard jackknifing on a lonely stretch of highway damaged the clutch on Kelly’s truck and sent her limping home for repairs after what she called “the most adventurous first trip I’ve ever had.”

This week she found herself sitting in front of her ex-boss, Polar Enterprises President Mark Kohaykewych explaining her plight: loads to deliver, not much money and a truck in need of $10,000 in repairs.

Kohaykewych’s shop made the repairs and Kelly was off to start earning the money to pay off her debt … hauling a load of groceries for Polar.

Ahead was 400 miles of a badly rutted, rather hilly ice road to Island Lake.

“Holy crap,” said Kelly as she faced a steep and icy hill, which she couldn’t crest on her first attempt. After backing down, Kelly made a harder run at it, and this time she made it, but added, “That wasn’t even the big hill.”

With just 60 miles between her and Island Lake, Kelly came to the big hill and another truck in the middle of the road. The guy in the truck said he couldn’t make it up the hill, so Kelly did the only neighborly thing: offered to drive the truck up the hill for him.

Once again Kelly said, “Holy crap,” and drove the stranger’s truck up the hill for him.

“That was an adrenaline rush,” Kelly said before repeating the process with her own truck and heading on to Island Lake.

“I just went through hell,” Kelly said as her segment ended.

Burke had 700 miles of deteriorating ice road between him and Tadoule Lake in northern Manitoba. And, as narrator Thom Beers reminded us, the clock is ticking on road closures because of the warming weather.

While Burke has to limit his speed because of the rutted ice road, he still finds time — reluctantly at first — to show his softer side.

A car is off the ice road and stranded in the snow. Citing the creed of the ice roads — nobody gets left behind — Burke stops, puts a tow strap on the back of the stuck station wagon and gives it a few good yanks to freedom.

“They’re happy, and I’m happy,” said Burke as he heads north with the caution that this is the kind of weather that can cause even the best trucker to jackknife their truck.

While Burke manages to keep his truck moving forward over the rough terrain, his progress is soon halted by something even rarer than a man on foot: a traffic jam. Between 15 and 20 trucks were stopped as a crew worked to fix a deep rut that made the ice road impassable.

Burke and the others had to park overnight for the road to refreeze. But, Burke eventually reached Tadoule Lake after, as he said, “three nervous breakdowns and a small concussion.”

While Dewey didn’t have to stop to help anyone else, he had his hands full with his trip to Muskrat Dam in northern Ontario.

But, he planned to make the trip and get home in one piece.

All that being said, Dewey’s run still included an 11-mile crossing of a frozen lake. After walking out onto the ice and examining some serious cracks, Dewey said, “I don’t see any open water. It’s time to go to work.”

Driving across the lake and listening to the ice pop and crack under his truck’s tires, Dewey mused on the uncertainty of driving in such conditions:

“No matter how many times you do this, it gets your blood pumping.

“Right now, the ice is incontrol; I’m not. If it wants to break, it’s going to break.”

But, it didn’t and Dewey rolled on to Muskrat Dam. 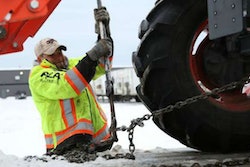 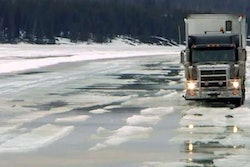 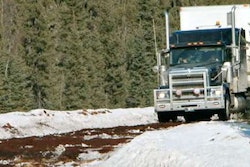 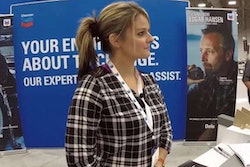