FedEx Freight driver Scott Woodrome is a familiar face at the annual Ohio Truck Driving Championship. He was named the 2006 Ohio Rookie of the Year and has competed in the state-level championship 13 times, winning each year.

The countless hours Woodrome has spent training for those competitions paid off when he was named the American Trucking Associations’ 2018 National Truck Driving Grand Champion in August.

“It’s kind of like a dream come true. It’s something that you work for but you never know how the numbers are going to roll out,” Woodrome said. “I keep comparing it to a journey because sometimes you start climbing up that mountain then you slip a little bit, but then you keep climbing because you know the goal is in sight and finally when your name is called out, you’re standing up there with such a satisfying, wonderful feeling of accomplishment.”

While this was his first year taking home the overall title, it wasn’t Woodrome’s first win on the national level. He was the 2015 National Flatbed Champion, as well. He competed in the tanker class this year but has competed in six different classes altogether.

“Safety is important to me and this is a great tool to get involved in,” Woodrome said about competing. “It opens a lot of different doors and you get to see safety in a whole different light.”

Woodrome is also an accomplished driver outside of the championships. He was named the Ohio Trucking Associations’ 2015 Driver of the Year and is a former America’s Road Team Captain.

Woodrome is thankful for the support system he has in his fellow FedEx drivers, drivers from other companies, and his wife, Lorraine, who helps him train for the competitions. Woodrome spends his weekends navigating practice courses to keep his skills sharp for the competitions.

“On the weekends when I’m off work I’m going to a place where I can practice the course and different things and go over different maneuvers. It’s a lot of hard work, a lot of sweat during the summertime,” Woodrome said. “When people are doing other things you’re not doing those things. You’re kind of in training, so to speak.”

“This is something good to get involved in because it promotes safety. It makes you a better driver at recognizing your equipment and learning about the industry through the driver’s books. It’s fun to be a part of something that’s good because obviously when we’re safe, everybody wins,” Woodrome said.

Outside of trucking, Woodrome enjoys driving his convertible 1968 Cutlass Oldsmobile. He bought it after he was named National Flatbed Champion in 2015. He wanted to buy the car because it reminded him of when he was a kid. He occasionally takes the car to shows.

“I just always liked that era and that muscle car look,” Woodrome said. 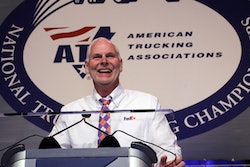 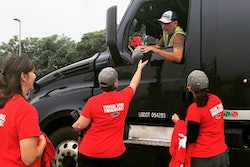 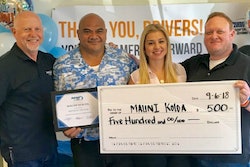 Carrier honors its 11 drivers of the year 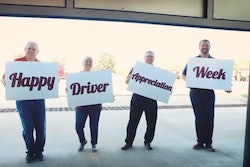