A New Hampshire company driver Tuesday was named the Highway Angel of the Year at the Truckload Carriers Association’s annual convention at the Wynn Resort in Las Vegas.

Brian Snell, a Marine veteran who drives for Pottle’s Transportation of Bangor, Maine was recognized for his actions at the scene of an accident in the early morning hours of June 8 last year. He was presented with his award by EpicVue CEO Lance Platt and TCA’s Highway Angel spokesperson Lindsay Lawler.

During the presentation, Platt and Lawler recounted what Snell did that day in June.

He was westbound on Interstate 495 in Westward, Massachusetts when a woman driving the wrong way seemed to have spun out in front of Snell’s truck. He stopped his truck and positioned it to protect her car from traffic. Snell tried to resuscitate the woman, who was unconscious.

That’s when he noticed the woman’s car had caught fire. He ran to his truck, got an extinguisher and put out the blaze. He also saw the woman had hit another car. He ran to that vehicle, but the 32-year-old man in it was already dead. Snell was, however, able to rescue a dog from the man’s vehicle and hand it off to a state police K-9 officer who was first on the scene.

Snell later learned the woman was intoxicated at the time of the accident and was ultimately charged with vehicular homicide. He said the dog was returned to the man’s family.

But, what Snell did on I-495 that day was not the only time the former Marine stepped up to help. He was one of the many first responders who flocked to what would become known as Ground Zero, the World Trade Center in New York City, when it was attacked on 9/11.

Snell’s work at Ground Zero took a toll on him. He said he worked in the rubble for four days immediately after the Twin Towers collapsed. As a result, he suffered damage to a lung, which forced him out of his job in law enforcement.

That’s when he turned to trucking. Years before, his grandfather urged him to get his CDL. That advice came in handy when Snell needed a new career.

Still, he is not far from his first responder days while on the road. He wears a high visibility EMT vest and carries his medical bag in his truck. He said he always stops if there is an accident, if someone just spins out or there is another trucker in need. Snell also said that comes naturally.

“We’re all called upon to be the Good Samaritan,” said Snell when accepting the award. “That’s what the Lord has asked us to do.”

He hopes other drivers will stop when they see someone in need.

“We often are truly the first responders,” said Snell who lives in Merrimack, New Hampshire. “There are so many of us out there where things go wrong.”

Snell suggests drivers learn CPR and basic first aid. He also said they should keep disposable gloves — the kind medical professionals wear — in their trucks to protect themselves. 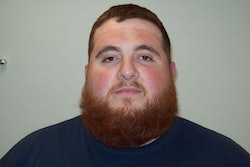