Editor’s Note: This is the first of several stories based on a recent survey of readers of Truckers News and our sister publication for owner-operators Overdrive. Part one is an overview of responses and looks at how drivers perceive their jobs. We’ll also look at the biggest issue truckers addressed: driver compensation. The series will also take up drivers’ views about retirement and find out if they are prepared to hang up the keys.

More than half the truck drivers in a recent survey see their work as only a job with which to pay the bills, almost a third said they would like to get out of the industry, and the majority believe new trucking technology will be used to monitor and control them.

Those were three of the major findings from a survey of readers of Truckers News and Overdrive. The responses from 919 truckers — 589 company drivers (64%) and 330 leased owner-operators (36%) — also found:

It oughtn’t come as any surprise that many drivers were not wildly thrilled with their chosen job. Recent Bureau of Labor Statistics found truck driving was about as dangerous a job as one could choose. In April, USA Today reported that truck driving was ranked 17th among the worst jobs in the U.S. based on job stress, satisfaction, safety, pay, future job prospects, and job security. And, a recent Gallup poll found fully 44% of Americans consider their jobs as “mediocre” and another 16% said their job was downright “bad.”

That Gallup poll also found a strong connection between what people earn and how they feel about their jobs. In short, the more they make, the more they like their jobs. That also provides insight into how truckers feel about the work they do. Responses to several questions create the overarching finding of the survey: truckers feel they don’t get paid enough. Just 23% of all truckers — less than one in four — said they got into the industry to earn good money and tend to the needs of their families They also think low pay is why trucking companies have problems recruiting and retaining drivers.

That also reflects findings in the annual industry survey of critical issues conducted by the American Transportation Research Institute and released last fall. Truckers responding to the survey ranked driver compensation as the number one issue facing the industry. That compares to trucker pay not even being in the top 10 issues as voted on by trucking companies, which rated the driver shortage first and driver retention second.

Results of the survey paint a picture of the American trucker at the beginning of a new decade. More than half drive over-the-road, almost two-thirds have been in the industry 20 years or more and the majority drove between 75,000 and 125,000 miles in 2019 and. And, here’s why pay may be of such concern: 63% earned $75,000 or less last year for a difficult, demanding job.

Let’s take a deeper dive into the responses of the Truckers News/Overdrive survey.

We asked: What is the one thing you dislike most about your job today?

We asked: What would be the main reason you would consider changing jobs and driving for another fleet?

We asked: How do you feel about your long-term prospects of driving a truck?

We asked: What do you think of the future of truck driving?

We asked: What was your net income last year?

David Hollis is the editor of Truckers News and may be reach at davidhollis@randallreilly.com 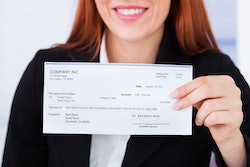 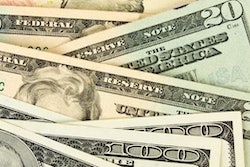 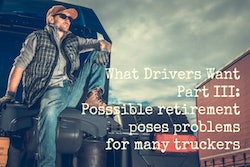 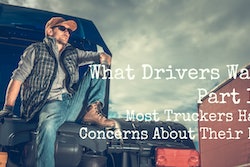