A new poll being touted by highway safety groups and the Teamsters Union shows Americans “overwhelmingly” oppose legislation that would roll back some of last year’s changes to the hours-of-service rule, but trucking industry representatives call the results “misleading” and “harmful.”

The survey by Lake Research Partners shows 80 percent of the public oppose Congress “raising the number of hours a semi-truck driver is allowed to work in a week from 70 to 82 hours,” which is “more than twice the normal work week for most people,” as the poll question reads.

“This survey reveals a clear disconnect between what the public wants and what special trucking interests want from Congress at the expense of public safety for everyone,” Advocates for Highway and Auto Safety President Jackie Gillan said in conference call. “We urge Congress to reject this anti-safety change and heed the public’s correct assessment of the dangers.”

“You do not get to 80 percent opposed in any question unless you have really wide and deep support,” he said, noting the bipartisan breakdown of the survey responses.

When Congress returns to Washington after next month’s elections, debate will resume on annual spending bills for federal agencies including the Transportation, Housing and Urban Development FY 2015 Appropriations bill. The Senate version, S. 2438, includes a rider sponsored by Sen. Susan Collins which would suspend the 2013 changes to the restart provision of the hours-of-service rule pending a review of the rule’s impact. That amendment passed the Senate Appropriations Committee by a bipartisan vote of 21-9 in June.

Indeed, the poll numbers will be a “game changer” at the Capitol, explained Blumenthal, who participated in the press conference.

“This poll shows irrefutably where American public is on this issue of driving hours and driving safety. The American public gets it,” Blumenthal said. “I’d kind of like to meet some of that 17 percent who doesn’t get it.”

And Joan Claybrook, Citizens for Reliable and Safe Highways, referred to trucks as “sweatshops on wheels,” and said the trucking industry promotes “economic interests at the expense of public safety interests.”

“Special trucking interests are roaming the halls of Congress to promote enactment of legislation that guts important safety laws without any prior public review or agency consideration or open congressional hearings on the safety impacts. These trucking interests,” Claybrook said. “They craft misleading claims about the so-called minor changes they want but fail to reveal the major and fatal consequences of these proposals. This poll shows that they are not fooling the public one bit.”

But those special interests were quick to reject the poll.

“The results of a misleading push poll should not be taken into consideration when crafting public policy – good data and research should be. Unfortunately, FMCSA did not have such information – such as the impact the rules would have on increased daytime truck traffic and the corresponding elevated crash risk – when they drafted them,” said American Trucking Associations President and CEO Bill Graves. “Sen. Collins’ proposal would simply suspend these new rules so the agency can evaluate the true risks and the net impact on highway safety. We doubt any poll respondent would support these new restrictions that discourage drivers from taking lengthy rest periods, and that increase daytime truck traffic and raise crash risk.”

Graves added that FMCSA has previously said the working hours envisioned by industry critics are only possible in an “imaginary world.”

“We don’t interpret the findings of the survey to be anything helpful in improving highway safety,” Taylor said. “Continuing to perpetuate a myth about an 82 hour work week is actually harmful.”

OOIDA suggested that a “more relevant and objective question” would have been to ask if highway users preferred having trucks on the roads overnight or during morning rush hour traffic.

“This legitimate poll, in addition to finding that most Americans rightly believe that professional truck drivers are the safest drivers on the road – a point even conceded by our critics – found that Americans would prefer trucks operate at the time of day now restricted by FMCSA’s recent rule changes by a 67-24 margin,” he said.

Asked to reconcile those poll results (including a 8 in 10 Americans believing truck drivers are safer than passenger vehicle drivers) with the numbers being touted Wednesday, Blumenthal conceded the public is “probably” right in its assessment.

“Most truck drivers – person for person, pound per pound – are safer drivers than many Americans on the roads today,” Blumenthal said. “But when you’re behind the wheel and you’re in that 11th hour, fatigue is a great enemy for the even the safest driver in the world. This poll just confirms what we know – but it does so very dramatically and powerfully. A politician who ignores these compelling results does so at his peril.”

Advocates’ Gillan, however, discounted the rush hour impact of the current restart rule and the public perception of truck drivers being safer than passenger vehicle drivers.

“The vast majority of people killed in truck crashes are car occupants,” Gillan said. “And as we all know, when you’re deceased you can’t say what happened.”

But for the Trucking Alliance, a group of several carriers working together to promote a number of items on their safety agenda, this hours-of-service debate is “futile” until electronic logging devices are mandated.

“The stark reality is that without a way to verify industry compliance it doesn’t matter what the federal government’s hours-of-service rules are for truck drivers,” said Alliance Managing Director Lane Kidd. “So nobody really knows who is and who is not following these rules because paper logbooks easily allow truck drivers to exceed their maximum number of hours behind the wheel.” 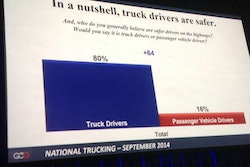 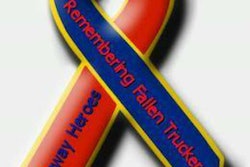 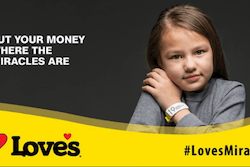 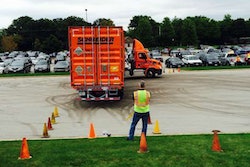