Girl rides her horse through snow to aid stranded trucker

A favorite category of social media memes today are ones lamenting the state of today’s youth. They’re portrayed as disengaged, fixated on their smartphones and caring about little more than themselves.

There’s an 18-year-old woman in Canada who destroys that image, and a truck driver who couldn’t be happier she does. 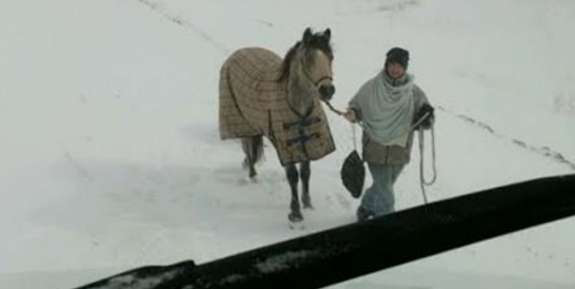 Eileen Eagle Bears lives near Minto, Manitoba, Canada, a place that got socked by massive a three-day snowstorm earlier this week. The CBC reports she and her mom were watching traffic cams of highways in the province Monday, March 6, when they saw a trucker was stranded on Highway 10 about five kilometers from their home.

Eileen decided if the trucker was still there in the morning, she’d take him some coffee. He was and she did.

Eagle Bears saddled up Mr. Smudge, her horse, and rode out to the truck stranded on the highway. She delivered a Thermos of coffee. She went back that evening with more coffee and a hot meal. Later that night, the trucker was able to get moving again.

Eagle Bears told the CBC: “I just did it because I wanted to help, so I just feel like I did the right thing.”

On the topic of Facebook, Eagle Bears’ act of kindness blew up on Facebook when her mom made a simple post about her daughter. Be sure to check out the comments.