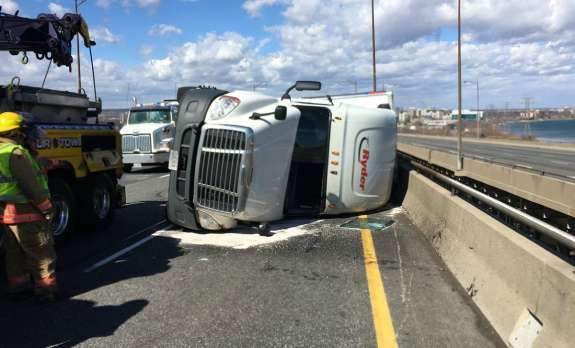 This truck was blown over on the Burlington skyway by high winds Wednesday. (Twitter photo by OPP Sgt. Kerry Schmidt)

A truck driver from Texas had his rig tipped over by high winds on a bridge in Canada Wednesday, March 8.

Ontario Provincial Police report a tractor-trailer driven by James Estepp was blown over Wednesday afternoon as he drove over the Burlington skyway bridge in Burlington, Ontario, Canada.

Estepp, who was not injured in the rollover, told the CBC: “I had slowed down … and the traffic was going like maybe 50 km/h, and the next thing I knew, the back of the trailer starting rolling over, and I was trying to adjust for it, but it just kind of rolled over like a wave.”

Environment Canada had issued a high wind warning that said gusts as high as 55 mph could be expected.

The OPP closed the Burlington skyway and also the Garden City Skyway near St. Catharines.

Burlington Skyway closed in both directions due to high winds and a rolled over transport truck pic.twitter.com/mmapeKmWDx