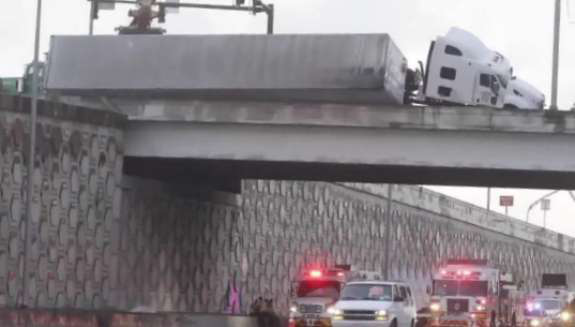 One man is dead and a truck driver faces charges after his tractor-trailer almost fell off an I-95 overpass near Boca Raton, Florida Wednesday, April 12.

Tow truck driver Richard Randolph, 69, died when he fell off the overpass and onto I-95 while trying to right the truck that had fallen on its side.

Truck driver Adrian Figueredo of Miami was charged with making an improper turn and an hours of service violation. Media reports say Figueredo’s truck struck the concrete barrier in the media when he exited I-95. The trailer of the rig was left balanced on the overpass wall.

The mishap occurred at about 5:30 a.m. and left traffic backed up on I-95 for several hours Wednesday.