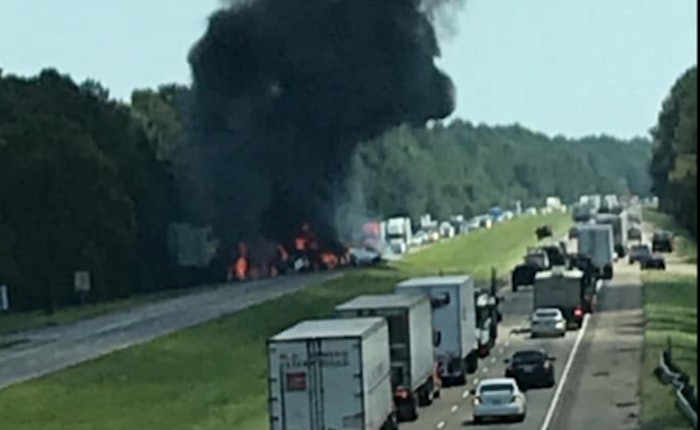 A statement from the Lousiana State Police said their initial investigation revealed the crash occurred as a Kenworth tractor-trailer and a 2018 Toyota Highlander were traveling eastbound on I-12. For reasons still under investigation, according to the Troopers, the Kenworth struck the Toyota. This caused both vehicles to cross the median and enter the westbound lanes of travel, which resulted in the Kenworth striking a Western Star tractor-trailer head-on and the Toyota overturning. After the Kenworth struck the Western Star, both vehicles became engulfed in flames, according to the troopers’ statement.

Both drivers were pronounced dead at the scene, said police. Neither trucker has been identified.

The driver of the Toyota sustained moderate injuries and was transported to a local hospital for treatment.

This crash remains under investigation and there is no further information at this time, according to the troopers.

Officials in Livingston Parish are asking drivers to avoid unnecessary travel this afternoon. I-12 EB & WB, I-55, and US 190 are parking lots. pic.twitter.com/gTmM3xQ6iB

VIDEO: I-12 still shut down by fiery pile-up in Livingston Parish; state police say at least one person is dead https://t.co/4SO4ZY5wwU pic.twitter.com/tEvnyHNg7R