Robin Grapa, 37, had a comfortable office job working as a graphic designer when she started to dislike her daily routine.

“I started getting antsy going into the same desk every day and looking at the same computer every day,” said Robin, who’s from Kaukauna, Wisconsin,  “I don’t mind routine so much, but it was just getting to be a little too much.”

Her husband Adam was a truck driver and she decided to leave her office job in 2013 to drive team with him. First, though, she took a small detour to hike one of the longest and most difficult trails in the United States: The Pacific Crest Trail (PCT).

The PCT stretches from Mexico to Canada and runs 2,650 miles through California, Oregon and Washington state. It’s quite the undertaking, but Robin had a strong foundation in hiking and outdoors sports. She hiked across the country on the American Discovery Trail in 2006 with her mother as a charity hike for aplastic anemia, a blood condition Robin was diagnosed with when she was 18-years-old. Robin first fell in love with the outdoors after an outdoor education class she’d taken her senior year in high school. As part of the class she had to do a three-day backpacking trip, and that’s where her love of hiking kicked off.

“After my aches and pains went away I couldn’t wait to do it again,” Robin said.

Robin hiked the PCT with a friend, and her husband drove and met them at stops along the way to help them resupply. They hiked almost every mile of the trail, which isn’t common. Usually hikers experience fire detours and other obstacles along the way and have to reroute, but they managed to avoid that with one exception at the end. About 60 miles from the trail finish near the Canadian border, a huge snow storm came made the trail impassable. Robin and her friend were determined, however, to get those last 60 miles in somehow.

“We came up with an alternate plan where we drove 20 miles to get to an alternate trail that was lower in elevation and didn’t have snow,” Robin said.

But as soon as they got there, park rangers showed up and closed the trail. Their hike unfortunately coincided with the October 2013 government shut down at that exact moment.

“They closed that trail and would not let us go on that trail. We had to end our hike 60 miles short,” Robin said.

Adam drove them into Canada and they hiked down to the border so they could see the trail’s northern monument, at least. When Robin got home, she went through a 10-week trucking school program and joined her husband as a team driver. They drive for V & S Midwest Carriers Corp., based in Kaukauna. They mostly haul reefer out west weekly and make it home every week for a night or two.

Trucking works well for Robin because there’s never any complacency.

“Trucking is nice because you’re always moving. Even if you’re taking the same route every week, it changes with the seasons and there’s always something different. In this industry you’re always constantly learning something,” Robin said.

Trucking with her husband, Robin says, is ultimately her favorite part of the job.

“We are a great team,” Robin said. “We love working with each other and working this closely together.” 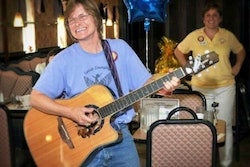 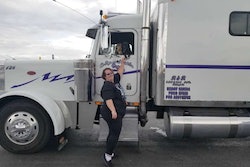 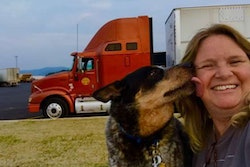 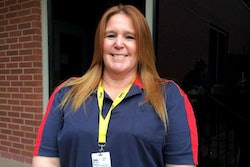 Driver likes being ‘treated like one of the guys’