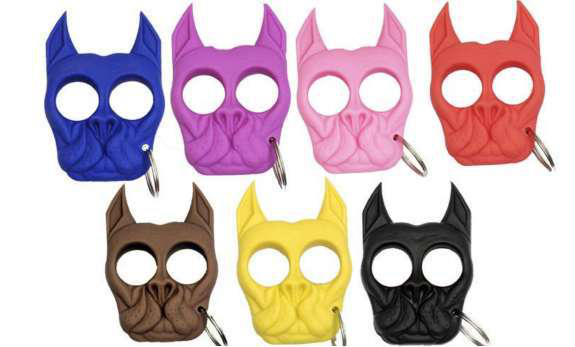 It’s often said that a dog is man’s best friend.

One particular dog — a bulldog — may not be a woman’s best friend, but it may help keep her safe.

To be sure, we’re not talking about the four-legged, furry kind of bulldog that’s the mascot for Mack trucks, the U.S. Marines and many a college sports team.

This particular bulldog, Brutus, is just 3 1/2″ x 2 1/2″ and is made out of a lightweight but sturdy composite material. Attached to your keyring, you slip two fingers through the eyes of the bulldog and his ears become a pointed self-defense device that may come in handy if you find you need to fight off an attacker.

And, if you prefer cats over dogs, there’s a similar self-defense keychain just for you.