Mary Legg was sitting in a business marketing class when a light bulb went off in her head.

Legg wasn’t sure what she wanted to do with her business marketing degree, and the class had been talking a lot that day about freight. She realized trucking could be the start she was looking for.

“I have a couple family members and friends that are in this business and they were like, the best thing for you, even if you wanted to own your own logistics company, is to start from the bottom,” Legg, who’s from Mobile, Alabama, said. “Get the experience; learn how to drive.”

Legg now hauls flatbed as a company driver for Boyd Bros. Transportation, headquartered in Clayton, Alabama. She received her business marketing degree from the University of South Alabama, but she hasn’t stopped being a student since graduating. She signed up for a two-week freight broker class because she wanted to learn even more about trucking.

“I wanted to learn as much as I could about the industry in its entirety. I would like to get my freight broker license and start my own logistics company,” Legg said of her long-term goals.

The best teacher is experience, Legg says. She wants to learn the industry from the ground up before she tries branching out on her own. When she speaks to veteran drivers at truck stops, she says she asks them about their experiences and they often tell her they wish they had started from her standpoint.

“You need to know how to be a follower before you can be a leader. In business, in general, you have to know what you’re doing before you can do it,” Legg said.

Before she started trucking, Legg spent eight years in the U.S. Navy handling aviation ordnance. She lifted bombs and missiles onto military aircrafts. She said her time in the military helped her be organized and professional as a trucker.

“There’s a standard that you have for order and being on time. I feel like I’m accountable for every load that I have and it’s very important to me to pick it up and deliver it safely on time,” Legg said. “I think the military has had a major impact on that.”

Legg has two children at home, a 10-year-old daughter and 7-year-old son. Legg says she would tell other mothers wanting to balance parenting and trucking that it’s not impossible if you have a strong support system. Her children stay with her parents when she’s on the road.

“Make sure you stay strong and lean wholly on that support system and make sure it’s somebody that you can trust so that when you’re on the road, you don’t have to worry. That worst thing you can do is worry when you’re out here,” Legg said.

She speaks to her children every day and brings them souvenirs from her travels. Her son is curious about trucking and asks her questions about what kind of loads she’s hauling and how much they weigh.

“It seems like all odds are maybe against her, but certainly it’s not. Learn as much as you can,” Legg said. 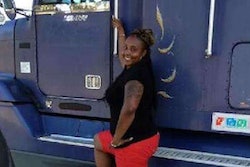 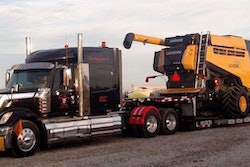 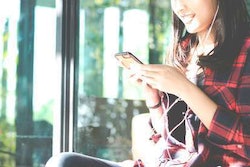 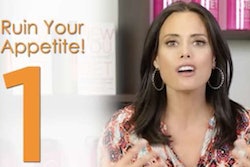