Owner-operator Chanita Ward had no idea what to expect visiting her first Great American Trucking Show in Dallas last week. She’d been invited by her company, CRST Malone, to talk to drivers at the show and help with recruiting, or at least that’s what she thought.

Unknown to Ward, her fleet had been planning to honor her for weeks with a ceremony at GATS. Chris Gonzalez, CRST Malone’s recruiting director, was inspired to honor Ward after he learned about her battle with breast cancer.

Ward, a flatbedder from Fort Smith, Arkansas, was diagnosed with breast cancer in 2013 and had to sit out a year from trucking while she underwent chemotherapy and another nine weeks of radiation.

She fought hard to get back into the truck after her diagnosis, assigning herself daily tasks to help her build her strength back up.

CRST Malone President Chris Deschaine echoed those sentiments, recounting how he was personally moved by Ward’s story and the memories it brought back of his own grandmother’s cancer battle.

“I understand the amount of willpower that goes into fighting something and believing that you’re going to fight and win something,” Deschaine said. “I can tell you, Chanita, in talking with you, you are a ray of sunshine. Your positivity and your attitude are second to none, so I want to thank you for being an inspiration to all of us at CRST Malone.”

CRST Malone, during the ceremony, surprised Ward with a certificate for a Caribbean cruise and a custom breast cancer awareness wrap for her truck. Ward knew the fleet had taken her truck, but she had no idea they were installing a custom wrap. She was visibly overcome with emotion when Andrew Hadland, president of CRST’s asset-light companies, called for the truck to be unveiled from behind a curtain.

“It really is a pleasure for us to present that to you, Chanita, for all of your perseverance and hard work. Congratulations,” Hadland said.

Ward was overwhelmed by the ceremony, vacation, and truck wrap. She would be smiling from ear to ear all day long, she said.

“It was a good feeling because the awareness needs to be put out there. Everyone needs to know to get a mammogram done. It’s just a feeling beyond belief,” Ward said.

Robin Hansen, the development manager with Susan G. Komen Dallas County, spoke at the ceremony about the importance of mammograms, early detection, and breast cancer awareness.

“This is a message. If you’re driving alongside of it or you’re at a truck stop anywhere and you see that, it’s going to hit home. You’re going to do something,” Hansen said about Ward’s new truck wrap.

Gonzalez himself has faced cancer, as well as have several members of his family. He said when he spoke to Ward the first time she lifted his spirits, and he knew he wanted to do something special for her.

“She’s definitely an amazing woman,” Gonzalez said. “The whole reason we did the vacation piece is because I want her to relax. Now that she’s fought her battles, kick back and relax.” 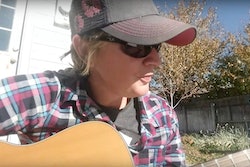 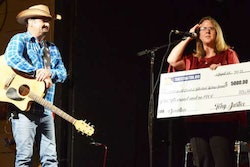 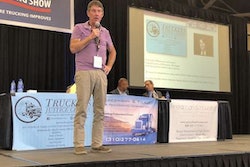 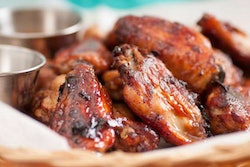