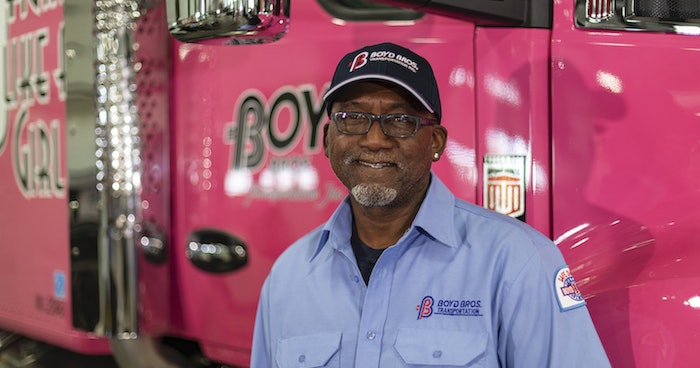 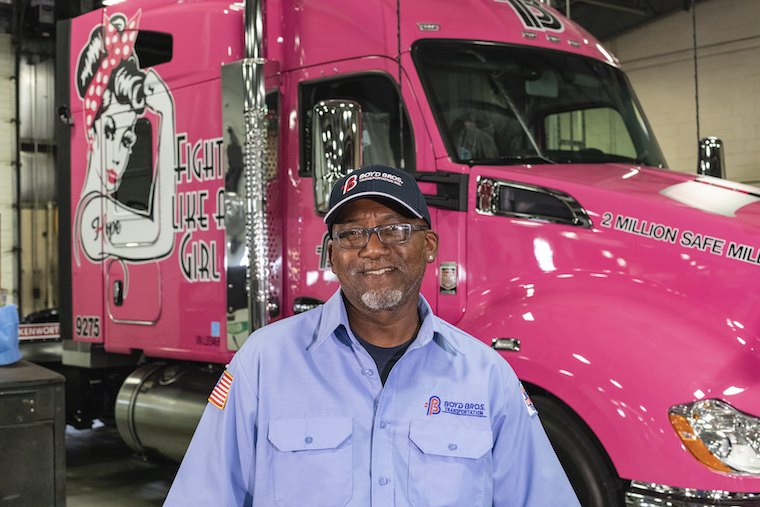 If you’re driving through the eastern two-thirds of the United States and you pass a bright pink truck, you may have just driven past Boyd Bros. driver Myron Moffett.

“I’ve had relatives who’ve gone through breast cancer, a relative who has passed from the disease and my mother-in-law is a breast cancer survivor,” Moffett, who is from Mississippi, said. “This is a subject that’s important to me because it’s affected people in my life and I’m honored to drive this truck in support of them.” 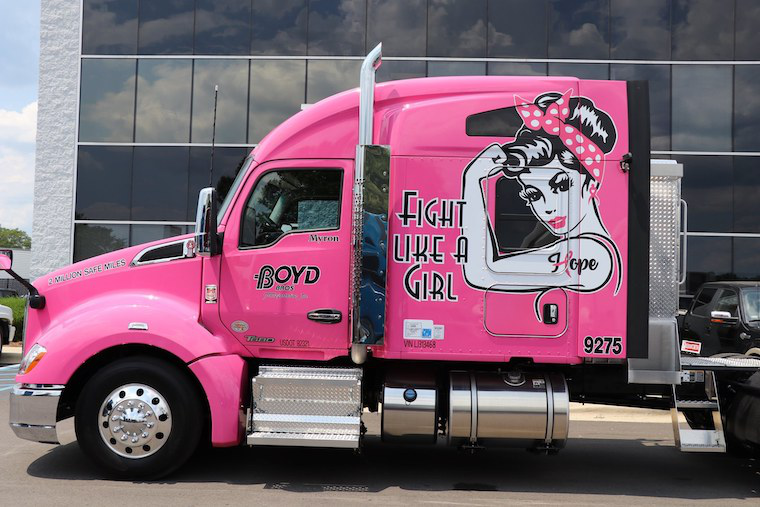 The truck’s sides feature a “Fight Like a Girl” call to action. (Image Courtesy of Facebook/Truckworx Kenworth)

Moffett has driven for Boyd Bros. for 19 years and recently achieved two million safe driving miles. Boyd Bros. assigned him the fleet’s recently designed breast cancer awareness truck in honor of his achievement after he expressed interest in driving it.

Nina Eiland, the flatbed fleet’s vice president of human resources and recruiting, had the original idea to do a pink truck with a purpose. She pitched the idea during a recruiting meeting and it quickly garnered interest.

The truck wrap was designed and installed by Steve Slusher of Slusher Signs in Cincinnati, Ohio. Moffett’s mother-in-law’s name, Annie, is written across the hood with a breast cancer awareness ribbon design. It boasts the message “Fight Like a Girl” on each side in large black font.

“Everyone has someone they know who’s been through breast cancer or has passed from it,” Moffett said. “I’m glad that this is a cause Boyd feels is important and I’m proud to support it.”

The truck has attracted a lot of positive attention from passersby on the road and Moffett’s fellow truckers at truck stops. Moffett gets waves and thumbs up from other drivers often. Eiland even received a call a few weeks ago from someone who’d driven by the truck, calling “to let Boyd know how awesome it was to see that truck going down the road and making such a statement,” Eiland said. “It’s getting a lot of exposure out there, positive exposure.”