RWIT reps to meet with FMCSA in November 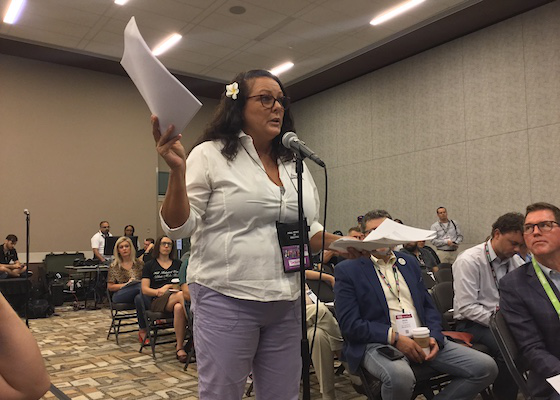 Representatives from the REAL Women in Trucking organization will meet with Federal Motor Carrier Safety Administration Administrator Raymond Martinez Nov. 6 to discuss sexual harassment and assault in the trucking industry. The meeting follows a petition RWIT presented to Martinez during an FMCSA listening session at the Great American Trucking Show in August.

RWIT’s petition features nine points, the first of which suggests that trucking regulatory bodies “place all trucking companies that use student truck drivers to move team freight on immediate probation.” The additional points suggest other actions RWIT believes FMCSA should take to curtail what RWIT says is a prevalent pattern of sexual harassment and assault in entry-level driver training fleets.

In all, the petition places an emphasis on immediate action, with the last of the nine points saying that FMCSA should “implement real solutions and demand accountability and change now. Not after a comment collection period that is well over two decades too late.”

That last point refers to a public request for comments FMCSA made on July 23 regarding what it called the “prevalence, seriousness, and nature of the problem of harassment and assaults against minority and female truckers.” It was that very request for comments that motivated RWIT President Desiree Wood to launch RWIT’s petition. When Wood attempted to post her comment she said she found the commenting system to be difficult to navigate and she wanted a more effective way of getting her point across.

“What came across to me is even if somebody had the courage to go and write on that regulatory docket, it is so complicated. It’s such a barrier to making a comment. We had to do something more,” Wood said.

Wood launched a coworker.org petition shortly before GATS with plans to present it to Martinez in person during the FMCSA listening session. At the time that she presented him the petition it had around 900 signatures and it currently has over 4,000 signatures. Wood followed up with FMCSA after the truck show and that was when she received an invitation for a 30-minute meeting with Martinez in Washington, D.C.

Wood will be accompanied to the meeting by longtime RWIT members and truck drivers Idella Hansen and Tamara Brock. She says she has also been in communication with representatives from the Time’s Up movement. Wood said RWIT hopes the 30-minute meeting on Nov. 6 will lead to future meetings and actionable solutions for addressing its concerns.

“We want the 30-minute meeting to lead to something bigger to actually solve this problem,” Wood said.