A new Class 8 truck racing series expects to be up and running at major road course tracks in the U.S. next spring, and is giving fleets the opportunity to participate with comparatively minimal investments.

Calling it “the next great American motorsports series,” organizers of the Champ Truck World Series announced their plans at the Great American Trucking Show in Dallas Thursday. In addition to outlining the series’ events, they announced a program to help trucking companies compete with minimal investments.

John Condren, a veteran race driver, track owner and one of four organizers of the new racing series, said events are being scheduled at 10 tracks across the country. The first is slated for Charlotte Motor Speedway April 17, 18 and 19.  Condren said he will have firm dates for the remaining races once tracks have dates for their other major events solidified.

What Is Champ Truck Racing?

There used to be a big rig racing series in the U.S. in the late 1970s, but it disappeared by the early 1990s. Today, said Condren, Class 8 truck racing is the number two motorsport in Europe, attracting between 45,000 and 50,000 fans to each race, and is popular in South America.

In an effort to contain costs and maximize the opportunity for success of the series, Condren said race trucks will be as close to stock as possible, with the exception of safety modifications. All trucks will:

How Can Trucking Companies Become Involved?

On Thursday Condren outlined the Fleet Participation Program, which allows trucking companies to give organizers several older, high-mileage/low-value trucks, one of which will be made raceworthy and returned to the company at no cost. Condren said those vehicles could be used for marketing purposes as well as internal and external promotion. The remaining trucks will be repaired and provided to celebrity/pro-am drivers or given to teams just getting started.

Condren made it clear that Champ Truck World Series racing will stage exciting, family-friendly events that include:

Joining Condren in the venture are:

What Is the Likelihood of Success for the New Race Series?

Not surprisingly, Condren is optimistic.  Saying, “Money ruins everything,” Condren wants the series to be affordable to small and medium-sized fleets and owner-operators as well. They already have a tire sponsor, Continental Tires, and Condren said two TV networks are bidding for broadcast rights. 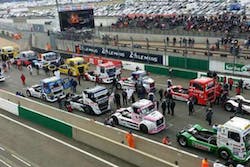 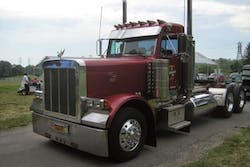 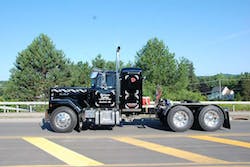