Three 2015 crew cab pickups-the Ram 1500, Chevrolet Silverado 1500 and Ford F-150-were recently put through a broad array of testing designed to evaluate the core uses of a truck owner by the editors of Motor Trend during their annual 1/2-ton shootout.

To determine a winner, the Motor Trend judges took the three competitors on a 260-mile drive through eastern California and western Arizona. Each truck’s performance was measured in a number of exercises, including:

After the data was collected, judges convened to determine which truck would be the victor of Motor Trend’s half-ton shootout. The winner is chosen by directly comparing empirical results and drive impressions of each truck.

With the votes cast, the Ram 1500 surfaced as the winner of Motor Trend’s 2015 half-ton pickup shootout.

Motor Trend’s editorial judges were particularly impressed with the performance of the Ram 1500’s EcoDiesel V-6 engine as well as its eight-speed TorqueFlite transmission, a combination that boasts best-in-class 28 mpg fuel economy.

“Our comparison of the latest half-ton pickup trucks was as exhaustive as it was comprehensive, because this segment is so important and so competitive. We evaluated every aspect of these trucks we could and debated long and hard over their merits,” said Scott Evans, Associate Editor — Motor Trend Magazine. 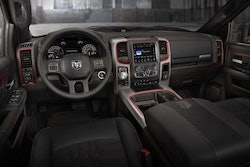 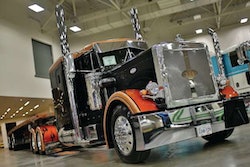 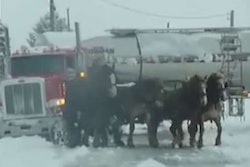 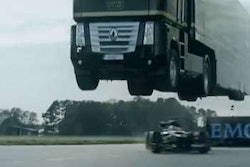 truck gets big air in leap over race car