Henry “Highway Hank” R. Good has two trucks at the Truckers Jamboree at the I80 Truck Stop in Walcott, Iowa this week.

One, his 2007 Kenworth W900L working truck, is on display and entered in the Super Trucks Beauty Contest. The other, a 1981 Kenworth K100, is part of the permanent collection of the I80 Trucking Museum.

Good, who calls Monticello, NY home, donated the ’81 K100 cabover – known as the Highway Hilton No. 1 – to the museum late last year. What made it museum-worthy was that it was a longtime fixture on the truck show circuit and some of its 1.6 million miles were logged on the highways of Europe in 1992 and 1993.

Good was born in Germany and came to this country as a boy. He said he grew up in the Catskill Mountains, and attended an elementary school located near a truck stop; that’s where his fascination with trucks was born.

He started driving truck as a young man, but was not content to drive only in the Northeast. So, for many years he drove from New York to California. (Today his Highway Hilton No. 2 is leased to DMTC and primarily hauls Blue Bunny Ice Cream and produce.)

Good, now 63, recalls he visited Europe several times over the years and made contacts in the trucking industry. Driving his the K100 there could be a bit tricky as many of the highways are considerably smaller than U.S. Interstates.

For Good, being at the Jamboree is a bit of a homecoming, and not just because his Highway Hilton No. 1 resides here. He says he has been stopping here for many years, becoming friends with the sprawling truck stop’s owners. 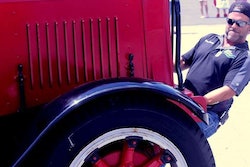