The Guilty by Association Truck Show ended Saturday night with a convoy from the 4 State Trucks’ location to downtown Joplin, Missouri.

The convoy, with proceeds benefiting the Special Olympics, broke the show’s previous record, set last year, for number of participating trucks. This year, 403 participated and raised $102,000, according to 4 States’ Bryan Martin, with money continuing to come in from convoy participants and others.

The truck show awards for Best of Show bobtail and combo were determined by the participants in the show. The combo win was hauled in by Virginia-based Mike Manuel and his autism awareness truck, a 2015 Peterbilt 389 and Mac curtainside combo. Kyle Cousins’ Fleenor Bros. “Ace in the Hole” 2008 Kenworth took the participants’ choice Best of Show for bobtail.
The annual Larry H. Martin Award, given to a trucker who goes above and beyond, was given to Everhart Transportation driver and singer-songwriter Tony Justice.
Related Stories 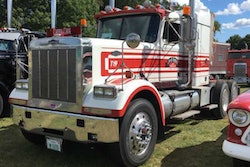 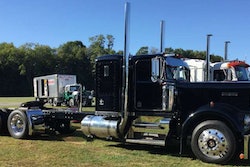 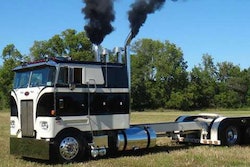 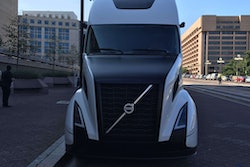 Volvo rolls out its SuperTruck