Jerry Howard’s 1956 DC-75 Autocar may be over 60 years old but it looks brand new. Freshly shined and completely restored, the truck is on display this week at the Mid-America Trucking Show in Louisville, Kentucky, through March 24.

It has a 400 BC Cummins engine, 34-inch bunker factory sleeper, R/T 00 9513 double overdrive transmission, 216-inch wheelbase, and many miles of memories.

Before Howard bought the truck, it was driven for about 45 years by husband and wife team Arnold and Joyce Eldridge of Algood, Tennessee. The truck has gone through countless engines and transmissions, so there’s no telling exactly how many miles it’s seen.

They bought the truck in 1958 when it was two years old. The Eldridge’s used it as their work truck and drove it all over the country. They retired in 1995 but held onto their trusted truck until December 2014, when they sold it to Howard.

When Howard got it, the truck’s appearance indicated how well-used it had been in its previous life.

“It was a good ol’ running truck but it wasn’t very pretty. It was in pretty sad shape,” Howard said.

Howard, who owns Howard Trucking in Fairborn, Ohio, stripped the truck all the way down. He redid the interior and did some work on the engine and transmission.

“What I did is just kind of dolled it up with new paint and new upholstery and brought it back,” Howard said.

Howard doesn’t use it as a work truck but he still drives it all the time. He’s a lifelong Autocar fan because he loves the look of them. He was particularly interested in this truck because it had a sleeper cab, which he says is rare for these trucks. At one point Howard said he owned seven or eight Autocars and he stills owns five or six of them.

“I just like the look of them because they look rugged with the big grill guard and the heavy duty bumper. They just look like they’d run through a building if they had to,” Howard said. 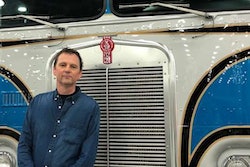 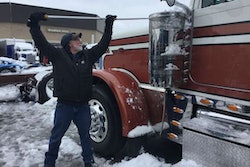 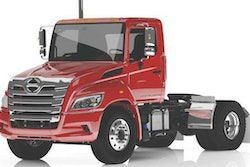 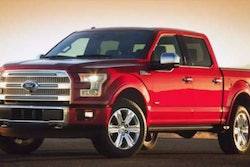